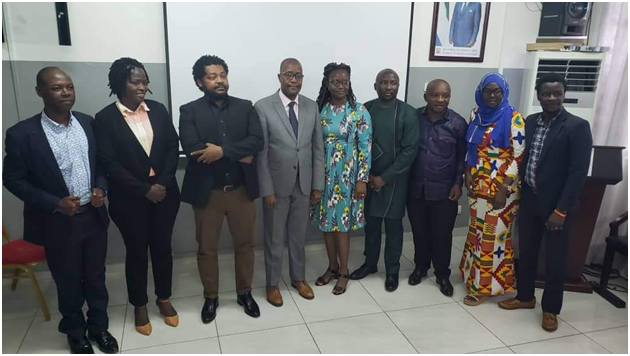 President of the Sierra Leone Association of Journalists (SLAJ), Ahmed Sahid Nasralla, has assured the Minister of Information and Communications, Mohamed Rahman Swaray, of the Association’s continued cooperation toward media development in the country.

Nasralla was speaking on Monday 12th September 2022 during a courtesy call of the newly-elected SLAJ National Executive on the Minister of Information and Communications, Mohamed Rahman Swaray, and his team at the Ministry’s conference room at Youyi Building, Brookfields in Freetown.

Describing the relationship between the Ministry and SLAJ as cordial, professional, and one of mutual respect, Nasralla mentioned the repeal of the Criminal Libel Law, the annual subvention to SLAJ, and the media viability and investment conference as key achievements borne out of the cooperation.

On the media viability and investment conference, which was funded by the BBC Media Action through the Government of Sierra Leone, Nasralla said the success story is that Sierra Leone has now been listed as one of 17 countries to benefit from the International Fund for Public Interest Media (IFPIM), thanks to the compelling case made by the Sierra Leone team headed by the Minister of Information at this year’s World Press Freedom Day summit in Uruguay.

Nasralla said in anticipation of that windfall for the media in Sierra Leone, SLAJ and other media stakeholders have been working with the Ministry to put in place structures to manage and administer the local counterpart of the IFPIM that the Government will also commit funds to.

He revealed that a Multi Stakeholders Advisory Board and a Technical Working Group have been set up in advance in that regard. These groups, he added, will also be responsible for follow-up and implementing the other recommendations that came out of the historic media conference.

President Nasralla also mentioned cooperation between the Ministry and SLAJ on the enactment of the Cyber Security and Crime Act 2021 but expressed some concerns in the area of free speech online and data privacy rights, the protection of critical national information infrastructure as well as the non-inclusion of media and civil society reps in the Advisory Council provided for in the Act.

He also expressed the need for more public education on the cyber law to help citizens and common interest groups understand the law to avoid conflict with it. He said SLAJ is seeking partnerships to simplify and popularize the law for the understanding of the average citizen, especially as the public elections draw near.

Nasralla reported that SLAJ is implementing a project titled Cyber Safe Sierra Leone by engaging stakeholders, journalists, civil society organizations, and bloggers to promote understanding of the cyber law and together build advocacy initiatives for the review of certain aspects of the law that have the potential to infringe on citizens’ right to free expression, especially online, and data privacy rights, and various offenses in Section 44 of the Act.

The SLAJ President also reminded the Minister about the land for the construction of SLAJ headquarters which has been challenging to locate in the central business district. He recalled the suggestion of the defunct Daily Mail building on Rawdon Street in Freetown as a possible alternative.

In addition, he stated the ongoing construction of the SLAJ Eastern Region Office in Kenema which is less than 60% complete and needs support; the land acquired by SLAJ South and the outstanding land for SLAJ Northern Region.

Nasralla revealed some of the plans SLAJ have to position itself well in terms of setting the agenda for the forthcoming public elections in June 2023 and ensuring information integrity throughout the electioneering process. He also talked about the need for training journalists on elections and gender-sensitive reporting as well as the safety and security of journalists during the election period.

Meanwhile, the SLAJ President assured the Minister and his team that his second term MEAL (Mobilize, Evaluate, Allocate, and Liberate) manifesto seeks to consolidate the gains that have been registered in the last three years under the SALT (Stimulate, Appreciate, Learn and Transfer) manifesto and push for more gains.

In response, Minister Swaray thanked the SLAJ President for the courtesy call and congratulated him on his re-election as well as his new colleagues in the Executive.

“Our relationship is one that is made in heaven. None of the outstanding achievements you have outlined would have been possible if SLAJ has not had a collaborative engagement with the Government on matters related to media development in Sierra Leone. Together we are doing a fantastic job in spite of the numerous challenges,” said Swaray, adding that the approach of the Nasralla-led SLAJ Executive is commendable.

The Minister noted that the Government understands the critical role the media plays in national development and that is why President Julius Maada Bio will continue to support media development in the country. He cited the role of SLAJ (and the media) in the fight against Ebola and COVID-19, during the mudslide, among other national emergencies, and said: “SLAJ has always been there to answer the clarion call to save lives and limbs.”

On the Cyber Security and Crime Act 2021, Swaray insisted that though it is technical legislation the cyber law makes provisions for the protection of fundamental rights more than any other law in the country. However, he welcomed the plan by SLAJ for the simplification of the cyber law and indicated that it is a project the Ministry, under the National Cyber Security Coordinating Office, is willing to collaborate on.

Swaray also revealed that under a USD50 million World Bank grant, the Government of Sierra Leone is currently identifying all critical national information infrastructure and they will be declared critical by His Excellency President Bio and will be protected.

He further revealed that the Data Protection Bill is currently with the Law Officers Department and will soon be tabled when Parliament resumes next month.

Regarding the land issue, the Minister advised that SLAJ do some intelligence gathering on the availability of State land in the CBD area and inform the Ministry. He also indicated that the Daily Mail building will be a possible and viable alternative.

Jamiru accepted the responsibility to work with SLAJ on the land/Daily Mail project and report to the Minister.

The meeting climaxed with the introduction of the new SLAJ Executive and posing for a group photo.

This is the first courtesy call by the new SLAJ Executive since their elections in June this year.