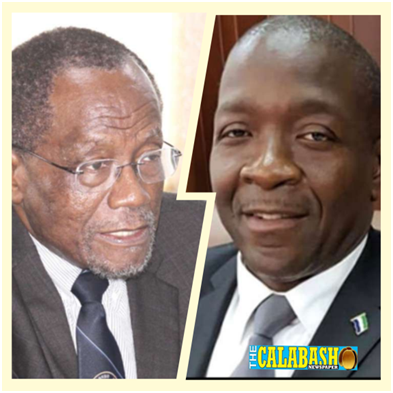 It seems there is a cold war between the Governor of the Bank of Sierra Leone, Professor Kelfala M. Kallon and the Managing Director of the Rokel Commercial Bank, Dr. Walton Ekundayo Gilpin, for reasons which are still not clear. But what has become really apparent is the fact that the Bank Governor has openly demonstrated raw determination to see that Dr.Gilpin is shown the exit door at Rokel Commercial Bank for real.

This could not be any form of fallacy of hasty generalization as it is as crystal, opaque that Professor Kelfala M. Kallon has deliberately formed a conclusive opinion on a matter referred to him relating to a complaint of sexual harassment by a female staff of the bank against the Managing Director. By all indications, as far as he is concerned Dr Gilpin is guilty but he does not have the authority to make such a pronouncement.

It will indeed interest many to know that the battle between the Bank Governor and Rokel Commercial Bank Board has resurfaced despite the fact that a Special Investigations Committee, he ordered instituted, sidelining the Board of Directors, had not found any case of sexual harassment against the Managing Director of the RCB.

Interestingly and lamentably, for a person of his status in society, the Governor went ahead and recently wrote that he will reject the report of the Special Investigation Committee, he authorized to be set up, maintaining that the Board should again investigate the Managing Director.

His rejection came at a time when the alleged sexual harassment case at the Rokel Commercial Bank (RCB) has now become dead horse but the Central Bank is now seen to voluntarily turn itself to a Kangaroo court manned by unofficial judges, with the Bank Governor seemingly posing as their Chief Justice.

It sounds rather ridiculous that after a Special Investigations Committee (SIC) had successfully and painstakingly investigated the issue and recommended that it has not find any case of sexual harassment against the RCB Managing Director, a recommendation that was reviewed by the Legal Affairs Department (LAD) of the Central Bank and further recommendations made to the Bank Governor, the latter has decided to rekindle the matter.

In his letter dated 18th July 2022 the Bank Governor stated the opinion of the Central Bank’s Legal Affairs Department and directed the RCB Board to review both the Report of the Special Investigative Committee (SIC) of the (RCB] Board and the BSL’s LAD Legal opinion, as well as RCB’s corporate governance policies to come to a definitive conclusion about the alleged sexual harassment and suggest disciplinary measures if necessary.

The Board’s reply dated 25thJuly 2022, noted six key issues, namely: “That a Fit and Proper (FPP) reassessment of the Managing Director (MD) falls within the jurisdiction of the BSL, not the RCB Board; that the opinion of the BSL’S Legal Affairs Department (LAD) is one-sided, and that the Board, “stands by the final report of the SIC” which found no evidence of sexual harassment by the MD; that the issue of sexual harassment was not for the Board to decide but a court of competent jurisdiction; that the Board, through the Ministry of Finance, would seek the Attorney General’s legal opinion on the matter; that the Bank Governor should have copied the Minister of Finance in his letter; and that the Board finds the Governor’s circulation of the letter beyond the SIC disturbing because it could have triggered its leak to the public.”

This reply seems not have gone down well with the Central Bank Governor, whom sources say is been influenced by certain individuals who are bent on bringing the RC Bank to its lowest ebb.

A letter from the Bank Governor to the RCB Board dated 12th September 2022 stated that, “While thanking the Special Investigative Committee (SIC) for devoting time and energy to investigating the instant matter, this letter serves as a formal notice that the SIC is hereby dissolved and that all decisions and recommendations regarding the extant complaint shall come from the full Board. In this regard, I wish to inform the Board that I feel compelled to reject the findings and conclusions communicated to me in your 25th July 2022 letter because they were reached by a subset of the Board (not the full Board, as I had directed in my 18th July 2022 letter).

Consequently, the Board (excluding the MD and the LA/CS) is again directed to review the Report of the SIC, the legal opinion of the BSL’s LAD, and RCB’s Policies and Procedures, as well as all complaints that have been lodged to it by the LA/CS and her colleagues about workplace intimidation. The findings and recommendations from that review must be submitted to me no later than Close-of-Business on Friday, 30th September 2022.”

In as much as they have been mandated by the Bank Governor, it is now up to the RCB Board to decide on the next step, especially after it had earlier categorically stated that it stood by the recommendations of the Special Investigations Committee (SIC), which had reported that there was no case of sexual harassment.

However, the fact remains that Dr. Walton Ekundayo Gilpin continues to be the Man of the People. Highly respected for working so hard to transform a moribund bank to a multi-awarding bank many are not oblivious of the fact that there are some unscrupulous persons who are hell bent on bringing down a bank that is wooing customers and as reported recently continues to make impressive profits and spreading its operations in order to scale up the much desired financial inclusion which is important to drive economic development.