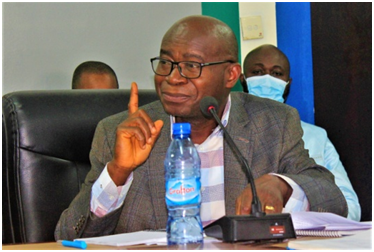 Speaking at the launch of the World Bank’s post-COVID-19 $93 Billion fund for poor developing countries on September 13 in Tokyo, Japan, Financial Secretary Sahr Jusu noted that nearly 60 percent of IDA loan receiving countries are either in debt distress or at high risk.

In relation to foreign assistance, he stated that the challenges faced today in terms of aid proliferation, fragmentation and coordination are similar to those in the late 1990s.

He further noted that the bulk of bilateral resources are implemented by donor partner agencies and NGOs with high-level of fragmentation and that the number of these has doubled in the last two decades.

The Financial Secretary stated that Sierra Leone has experienced that alignment sometimes can be very broad.  He said, for instance, Health can be in the National Development Plan but Government priority can be focusing on health strengthening system of its human capital development.

But donor “A” can insist on supporting increase in family planning, which it channels aid resources to agencies to implement.

According to him, that clearly will not assist Government achieve its top priority within the sector as articulated in its National Development Plan.

He suggested therefore that for effective development assistance, alignment should be activity based as prioritized by the Government in its national development plan.

From these observations of the country’s Financial Secretary, what The Calabash deduces is that while for some recipient countries, donor funds has been used to help them improve on crucial existential threats like food insecurity, economic development and population well-being by promoting institutional development and accountability, in many countries, because it has not been coordinated and properly managed and administered, donor funding has been more of a curse than blessing, as it has resulted in debt distress.