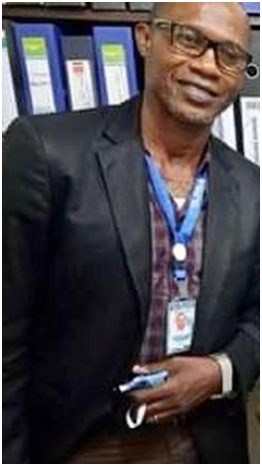 It is usually stated that a ripe corn is easily known by its looks. In an attempt to juxtapose that saying with the charismatic, pragmatic and result-oriented Senior Vehicle Examiner and Training Coordinator at the Sierra Leone Road Safety Authority (SLRSA), Francis Kovuma Morovia, it cannot be concluded that such an assertion is really an overstatement.

That assertion could be justified on the basis that Francis Kovuma Morovia is one such personality whom, on first sight, could be seen as someone who could be entrusted with any meaningful assignment and definitely he will endeavour his best to deliver solidly.

For the sake of those who are not aware, Francis Kovuma Morovia, has declared his firm intention to contest for the Village Headman position within one of the communities under the Western Area Rural District, Macdonald Village, an election which has been scheduled to take place next year.

In a privileged discussion with this medium, the affable personality, who always radiates with love and compassion, personifying hard-work, dedication intimated that after a considerable absence at Macdonald Village he was really disappointed after returning to only realize that the community is really in a backward state.

“When I came back after spending a considerable time away from Macdonald I observed that nothing had changed for the fact that the entire community is still going without electricity, has poor access road network, lack a health facility, pure drinking water and the issue of unemployment still remains the order of the day,” he stated.

Francis Kovuma Morovia commended one of the erstwhile occupants of the enviable position, popularly known as Aunty Francess. He stated that during her tenure she facilitated the construction of the Macdonald Village Community Junior Secondary School, a pure H20 facility, consolidated peace within the community adding that she is still alive.

He, however, revealed that the Headman who succeeded Aunty Francess, one, by the name of Oseh Koker reversed all the gains that residents of the village were then enjoying.

“Now deceased he only succeeded in destroying all the good legacies that were left behind by his predecessor and left the community sharply divided into factions,” Morovia, as he is fondly called revealed.

According to the aspiring candidate he has the lobbying power or ability to convince development partners to aid in the positive transformation of Macdonald Village.

He described the issue of improving health and sanitation as a priority for him if given the chance or opportunity to serve, followed by electricity and in improving the welfare of the youth.

Morovia attributed the failure on the part of the past leadership to work in line with the young people within the village assuring that his leadership structure wouldn’t only be inclusive, but would also be people centered underscoring that the existing gap between the leadership and young people would be bridged.

He expressed frustration over the complete absence of a health centre in a growing community saying such has resulted to transfer of health related cases from Macdonald to other areas with better health care facilities.

Morovia furthered that Macdonald Village is part of the Western Area Rural District Council (WARD-C) but lamented that they have never benefitted from any visible development.

He described Macdonald as a peaceful community with very ambitious young people and recalled that nobody was found wanting after the ugly August 10th violent protest in Freetown.

The Senior Vehicle Examiner and Training Coordinator assured that he was not vying for the position of the Macdonald Village Headman for any personal aggrandizement or to lord it over the residents but for him to be at a vantage position to lobby for the general development of the community.

“I always wanted good things to happen in my community that will benefit my people,” he stated  and concluded that one of the  things that residents of  the Macdonald community are looking forward to   is a credible free and fair village headmen election in order to attain peaceful co-existence.

In another engagement with the Youth Chairman of the Macdonald Community, Melvin Santos Brown, he stated that Morovia has been demonstrating interest for the Headman position of Macdonald Community since the days of the late Headman, adding that he is indeed competent for the position because he had all what it takes to govern the community well as required by the local government procedure.

“People love Morovia because he always makes things happen positively as anticipated,” he commended and disclosed that recently they embarked on a peace campaign with megaphones within the community to raise awareness on the need for people to always remain law abiding and show respect for the rule of law.

He appealed for residents to take part in the current ongoing voters’ registration process in order to become eligible to cast their votes.