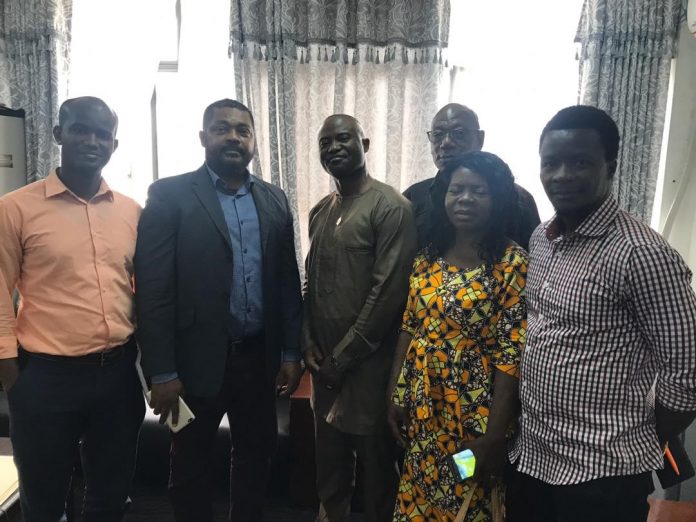 In a very proactive move, the Sierra Leone Association of Journalists (SLAJ) on 29 January 2020 urged the Minister of Lands, Housing and Country Planning, Dr. Dennis Sandy, to speak to the public  in order to respond to the many concerns being raised by citizens and non-citizens regarding his handling of land matters in the country.

The Association’s President, Ahmed Sahid Nasralla, took the opportunity to encourage the Minister to throw light on these concerns, especially the naming of Pa-O-Pa Town when members paid a courtesy call on the Minister on Wednesday 29th January 2020 at his Youyi Building office, Brookfields, Freetown, to follow up on progress in relation to allocation of State land to SLAJ.

Dr. Sandy responded by describing the Ministry of Lands as a whole industry that has been plagued by all kinds of criminal activities and conspiracies over the years. And to free the Ministry from such negative situation and give it a new direction, he said they have to employ aggressive measures.

“Everybody wants land; it’s a whole industry. It’s challenging, it’s chaotic and dirty. The land space in the Western Area has been squeezed over time. Our approach has been aggressive. Sometimes we have to behave abnormally for the benefit of the country and its citizens,” Dr. Sandy explained, adding that under his leadership there’s not going to be business as usual.

Regarding his recent naming of a settlement at Grafton as Pa-O-Pa Town, Dr. Sandy said he has authority to do so under many laws including the Freetown Improvement Act (Cap 66 of 1966).

He said it was the same powers that former Minister of Lands, Bobson Sesay, used to name the settlement around the US Embassy in Freetown as South Ridge areas around Hill Station as Plums Heath, IMATT and SS Camp; and other areas such as Angola Town and Gbangbayilla.

Furthermore, he explained that the settlement in question at Grafton was named Gibo Town or APC Corner by settlers on their own, which he described as illegal.

“We went there and found out they were state lands which were not properly acquired. So we reclaimed it and re-allocated the lands in a structured and orderly manner, and we are monitoring every construction on that land and every other settlement that we have identified, reclaimed and re-allocated for that matter. We called the key settlers, including Gibo, to a meeting here at my office and we all agreed to rename the area Pa-O-Pa Town,” explained Dr. Sandy, adding that there are many All People’s Congress (APC) supporters in the area whose land documents the Ministry has now authenticated.

He explained further: “It seems as if it is the name some people are unhappy about. When it was called APC Corner nobody raised concern. Pa-O-Pa is not SLPP. Pa-O-Pa means for the good of the country.”

The Lands Minister assured that whatever action he’s taking is supported by evidence and statutory authority of the Ministry. He mentioned briefly about families historically claiming 80 to 100 acres of land without proper documentation, people with documents but no land and non-citizens acquiring huge portions of land to the disadvantage of citizens among others, but assured SLAJ he would explain all of these in detail to the public very soon.

He said on Tuesday next he would be on Radio Democracy 98.1 FM’s popular ‘Gud Morning Salone’ program to explain to the public and respond to further concerns and questions.

Meanwhile, SLAJ requested for state land within the central business district to construct a convention center and in the provinces for its regional bodies in the North, South and East. The SLAJ President lamented the challenge of paying rent for the headquarters in Freetown and the regions against the background of struggling times for the country’s media industry.

Dr. Dennis said it would be historic, and a big legacy for him, for the Ministry to allocate land to SLAJ and its regional bodies, but advised the Association to follow due process and procedures by putting in an application formally.