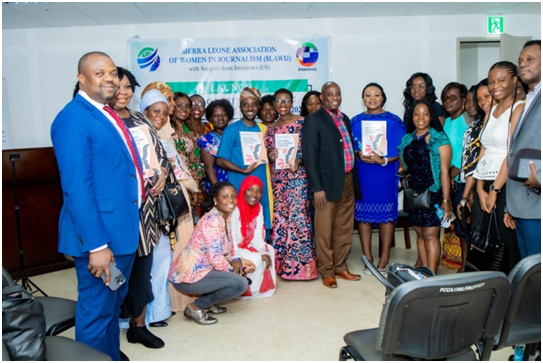 The Sierra Leone Association of Women in Journalism (SLAWIJ), with funding support from Internews (US), has launched a Report titled “Threats Against Public-Facing Women in Sierra Leone” on Thursday 28th July at the New City Hall in Freetown.

The research project began in January 2022, with specific objectives: to establish whether women journalists and Human Rights Defenders (HRDs) face harassment; to identify some of the types of (online and offline) harassment and/or threats experienced by women HRDs and women journalists; to explore the Legal Landscape and identify existing laws and/or legislation that relate to both online/technology-facilitated and offline violence against women and girls; to explore the Programmatic Landscape in Sierra Leone, and to identify opportunities that exist for further protecting, addressing, responding to or deterring threats against public-facing women in the country.

64% of women journalists and activists consulted by SLAWIJ said they have personally experienced at least one form of threat. According to the participants in the research project, the three most serious threats against Public-Facing Women in Sierra Leone include harassment, verbal insults, and verbal threats.

During the launch, a panel discussion was held on the conclusions and recommendations in the report. The panelists; Mayor Yvonne Aki-Sawyerr, Marcella Samba Sesay (Campaign for Good Governance), Hon. Catherine Zainab Tarawallie (Gender Committee Chairperson, House of Parliament), Chernor Bah (Purposeful), and Mariama Sowe (Media Trainer) highlighted the impact of those threats on women. Personal experiences from online and offline harassment and bullying by the female panelists and solutions moving forward formed a key part of the discussion. The Chairperson of the event, Naasu Fofanah, called on women not to relent in doing their work but rather accelerate efforts to get more women in public life even in the highest office in Sierra Leone.

In her keynote address, the Mayor of Freetown, Her Worship Yvonne Aki-Sawyerr stated that the report is timely and noted that those attacks are not only coming from men but other women also participate in such acts. She noted that women should stand by each other as “what happens to public facing women mirrors other women in the country.”

She also stated that individuals should not allow the impact of the insults to go unpunished or swept under the carpet.