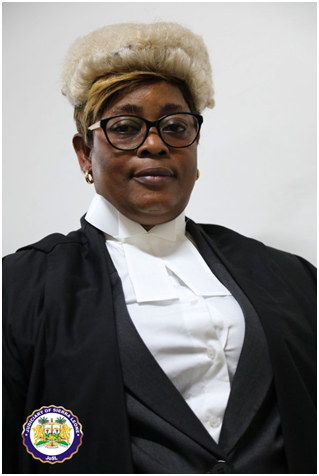 High Court Judge presiding over cases at the Sexual Offences Model Court in Freetown, Honourable Justice Manuela A. J. Harding has on the 29th July 2022 imprisoned a 29-year-old Technician, Umar Bai Kamara, to life after being found guilty of sexually penetrating an 11-year-old girl.

State Prosecutor, O. V. Robin Mason Jr alleged that the accused on a date unknown in 2020 sexually penetrated a child below the age of 18.

Upon his arraignment, the accused denied the allegation and the trial by judge alone application made by the State was granted by Hon. Justice Harding.

The State Prosecutor led in evidence four witnesses in support of his case including the child victim and her father.

In her Evidence in Chief, the 11-year-old victim recalled that on a day in 2020, she and her sister were watching television when the accused entered their house and joined them in the parlour.

She continued that because her father doesn’t usually allow strangers to sit in the parlour with them, she asked the accused Umar to leave but he told her she was unable to drive him away.

She went further to tell the Court that as soon as her sister left the parlour, the accused laid down on top of her and put his finger into her vagina which she immediately resisted and asked the accused Umar to stop but he refused.

The 11-year-old victim stressed that at another incident the accused came again into the parlour, lay on the parlour chair and pretended to be sleeping. As soon as she walked in, he grabbed her saying, “now I have got you, you are now alone, with all the noise that you have been making.”

The victim said that while he was speaking, he threw her on the chair, removed her pants and had sexual intercourse with her, adding that she reported the incident to her parents and was taken to hospital and medically examined with a certified medical report endorsed by a Medical Officer.

The 3rd Prosecution witness, Dr Olabisi Claudius Cole told the court that she is a Medical Doctor attached to the Rainbo Medical Centre at the Cottage Hospital in Freetown.

She recalled examining the victim and found out that her hymen was completely ruptured.

At the close of the Prosecution’s case, accused Umar Bai Kamara elected to rely on his voluntary caution statement made at the Police Station and called no witness.

In his Voluntary Caution Statement, the accused admitted that he sexually penetrated the victim who was eleven years old at the time of the incident but denied doing same to three other Juveniles as alleged.

In his allocutus, the convict Umar Bai Kamara pleaded for mercy.

In his plea in mitigation, Defence Counsel from the Legal Aid Board of Sierra Leone, K. Khanu pleaded that justice be tempered with mercy and asked the judge to take into consideration the time spent in custody.

She said the act of the convict would have psycho-social effect on the victim and especially in an African Society as ours where a child who has been known to be sexually abused is exposed to stigma and or ridicule by the Society.

Justice Harding reiterated that the victim will also lack the confidence a child ought to have when mingling with her peers in the community.

“I sentence the accused Umar Bai Kamara to Life Imprisonment (which gives the Correctional Centre the opportunity to implement the Prison Ordinance and compute the time the accused should serve the imprisonment term as a term of life imprisonment).”

In her compensatory Order, Justice Harding stated, “I hereby order the accused Umar Bai Kamara to compensate the victim herein in the sum of thirty million Leones pursuant to Section 37 of the Sexual Offences Amendment Act N0. 12 of 2012 as amended for Cost of necessary transportation, temporary housing and child care.
The cost, she added includes the emotional distress, pain and suffering incurred by the victim of the sexual penetration.