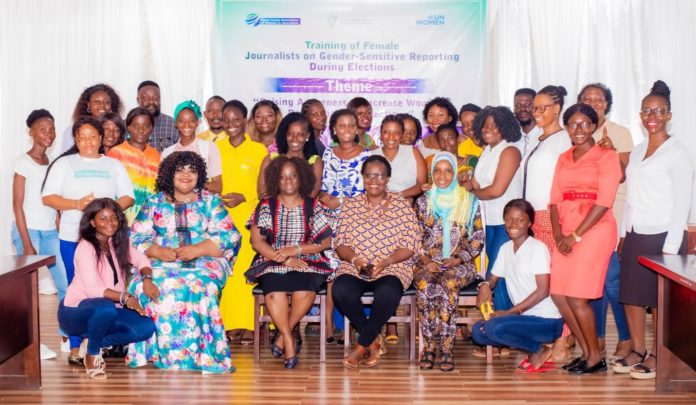 The Sierra Leone Association of Women in Journalism (SLAWIJ), with support from United Nations Women, organized a one day training, on the 5th May, 2022 at the CCSL Hall on King Harman Road in Freetown, targeting female journalists on Gender-sensitive Reporting during electioneering periods.

It was a training session geared towards creating awareness on increasing the number of women that intend to vie for elective positions in the forthcoming elections.

Executive President of SLAWIJ, Millicent Kargbo, expressed delight for conducting the training going forward to commend the UN Women for providing the necessary support in order to make the training a possibility.

She highlighted that for women yearning to aspire for elective positions there is need for them to take up the space they have been yearning for, which according to her, male counterparts have been claiming already exists but which they are not maximizing or effectively making use of.

“As women in the media landscape it is high time we lift up the banner which clearly spells out our needs and step up to roll out our responsibilities,” she enthused.

According to the Executive President, people sometimes consider media practitioners to be educators and as a result believe what they report more especially news content churned out by the mainstream media.

“There are so many confusions going on and our main responsibility now is to make things very clear in order to build the trust between media practitioners and the listening or the reading public,” she asserted.

She averred that as women in the media they want to make sure they properly equip themselves even before the elections maintaining that though some might say the electioneering period has not yet commenced and the need for such a training the answer should be preparing themselves well before that period begins.

“We want to make sure we change the narrative and the myths around women vying for elective positions,” she underscored adding how it has been very disappointing to see people pulling down during electioneering periods because of their gender.

She disclosed that they intentionally invited some men (he for She) with the avid conviction that together can make it.

Millicent Kargbo used the opportunity to encourage women in different political parties to step up for key positions in the country in the forth coming elections.

Speaking before the commencement of the training, the representative of the Head of Office of UN Women, Ella Syl-Macfoy, applauded the Executive of SLAWIJ for organizing such a training stating how it is critical for female journalists to define and be knowledgeable on how the media should go about gender reporting during the electioneering process.

Madam Ella asserted that female journalists have played significant roles in shaping public perceptions about women and men, adding that it is crucial for them to challenge gender stereotypes militating against women’s participation in politics in order to counter gender biasness related to male dominance.

One of the facilitators of the training programme, Dr. Claudine Hingston, intimated the beneficiaries that when reporting they need to be sensitive about gender issues furthering that for them to see the change they desire they themselves need to be the change first.

She continued that there is need for equal visibility admonishing female reporters to abstain from positive discrimination.

According to her Gender Sensitivity simply means that they should be mindful of what they say especially during elections further pointing out that they should portray to society what they want to see, instead of dwelling on bias reporting.

“Whatever you are doing, do it through the gender lens and try to be gender sensitive,” Claudine Hingston motivated the beneficiaries.

Dr. Tonya Musa, a Mass Communication Faculty Lecturer, at Fourah Bay College who was also one of the facilitators stated that gender sensitive reporting is geared towards mainstreaming women.

He added that profiling women is important cautioning that they should be sensitive in profiling attributes that are persuasive, about weak points these women can cover as well as to provide media literacy for aspiring  female politicians they want to profile.

Dr. Musa emphasized that participants must ensure their reports focus on equality, equity and empowerment. He advised that the media should prevent female aspirants from public sensitive issues.

Senior Electoral Officer of the Electoral Commission of Sierra Leone, Shebora A. Kamara, stated that election is a process and not an event revealing how the electoral cycle refers to the series of processes, events or activities during and after the conduct of the polls.