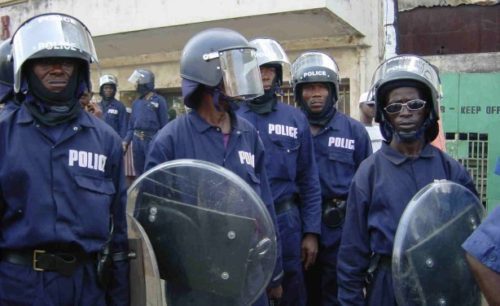 Seven senior police officers in the Sierra Leone Police have been demoted from Inspector to Sergeant and from Sergeant to Constable, according to a memo released recently and signed by the Human Resource Manager in the SLP, Aiah Edward Samadia, Assistant Inspector General (AIG).
The said memo referenced Q5/24 of 27/12/2018 (Promotion to Inspector) of which two police officers; 11060 Majorie I. N. Bangura and 8365 Osman Kamara were reduced from Inspector to Sergeant and five others have been reduced from Sergeant to Constable. Reasons for the above demotion from the Sierra Leone Police were not clearly stated in the memo from the SLP Human Resource Department.
However, usually reliable sources indicate that in the Sierra Leone Police, some of the demoted police officers presented certificates they acquired from colleges not affiliated to the University of Sierra Leone, which goes against the criteria for promotion in the SLP. Another alleged reason for the demotion of the said senior police officers was that they submitted credentials for promotion too early than the date they acquired such credentials, which according to the police source goes against the criteria for promotion in the SLP and some of the disgraced police officers presented fake certificates for promotion.
The police officers that have been reduced from Sergeant to Constable according to the memo are: 17656 Prince Karim Lahai from Eastern Police Division, 16396 Mohamed Bass Kabia from Kissy Division, 16775 Mohamed Minkailu Sesay from Family Support Unit (FSU) Head Quarters, 17788 Amara Kargbo from Central Division and 11399 Rugiatu Kargbo from Jui Health Center.