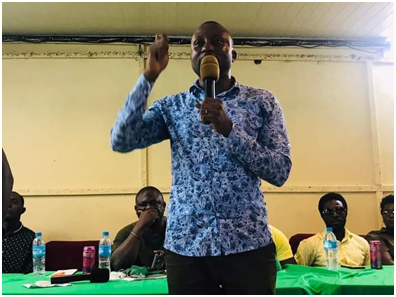 Ing. Francis Kallon, the Leader of the Young Generation Council of the SLPP on Saturday, 6th August 2022 brought together the Western Region youth membership of the party to strategize for an all-inclusive participation in the process ahead of the Voter Registration exercise nationwide slated to take place in September 2022.

Addressing young supporters of the SLPP at the John James Complex on Jenner Wright Road, in the East End of Freetown, Ing Francis Kallon, thanked all for attending the meeting.

He intimated how the meeting was convened to inform that the process of voter registration will soon commence adding that it is very key on their agenda to encourage the grassroots and first-time voters to participate and own the process.

The Young Generation Leader encouraged young supporters of the party to turn up in their numbers to register and also take the registration campaign to others in their various communities.

He continued by welcoming all to one of their regular meetings, saying he believes in working together to promote the ideals of the SLPP and President Bio’s agenda underscoring how in the midst of global crises of COVID- 19 and the Ukraine-Russia war, the President is still continuing to deliver.

Ing. Francis Kallon energized the youths when he assured that the SLPP Government would continue to create “pathways for young people to realize your potentials”.

He, therefore, admonished them to deviate from violence and remain united to achieve the 2023 goal.

“We need to be peaceful, united and loyal in our approach to push the agenda of the party to give President Bio a landslide victory in 2023,” he admonished and called on them to focus and take their minds away from hate speech.

The Youth Leader emphasized on youth participation for a landslide victory, saying “It is an obligation because President Bio has done a lot in his first term.”

He cited the Free Quality Education programme, the sustained electricity, and infrastructural developments among others as fulfillments of the SLPP manifesto by the President in just four years.

SLPP National Students Union President, Amadu Bangura, a student of Fourah College strongly assured the SLPP leadership of students’ support.  He said out of the about twenty-seven thousand students in the various universities across the country, he and his Executive will work with the leadership of Ing. Kallon to bring over twenty thousand of those votes for President Bio in 2023.

Amadu assured the YG Council leadership that they are ready to go on massive sensitization drive to target especially first time voters in the various colleges and universities.

Former YG leader and current National Organizing Secretary of the party, Hon. Musa Moigua in his contribution called on the leadership of the party to throw their total weight behind the young generation and the leader of the Young Generation Council to bring more votes for President Bio by supporting the registration process. He said the youths are the only ones that suffer when there is violence so he sent a message that they should fully participate in the voting process as their right and obligation.

The meeting ended with those in attendance socializing.