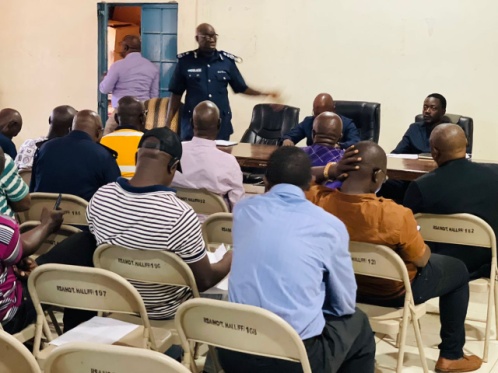 With a view to decongest the roads of Freetown, in order to enhance the free flow of traffic and promote road safety, the Agency charged with the responsibility of enhancing road safety in the country, the Sierra Leone Road Safety Authority (SLRSA), in collaboration with the Parliamentary Oversight Committee on Transport and the Sierra Leone Police, on the 16th November 2021 held a one-day stakeholders’ engagement at the Authority’s headquarters on Kissy Road in Freetown to map out an operational strategy.

Acting Executive Director of the SLRSA, James Baggie Bio, in explaining the purpose of the meeting, stated that sequel to the Wellington PMB fire disaster, the Parliamentary Oversight Committee on transport summoned the leadership of the SLRSA and other agencies to explain to the Committee some of the challenges facing the transport sector. He said during that engagement, the Committee emphasized on the need for the decongestion of Freetown by the removal of abandoned vehicles, street garages and the eradication of street trading.

He furthered that since the Authority has a tradition of working with stakeholders before commencing any operation, that was why the meeting was called so that stakeholders can as well inform their general membership.

He said a total of fifty-four streets have been identified within the city of Freetown for decongestion, disclosing how the Authority has enough capacity to undertake the exercise, He encouraged all stakeholders to support the operation in order to enhance the free flow of traffic and prevent road carnage.

Addressing the meeting, the Chairman of the Parliamentary Oversight Committee on Transport, Hon. Ambrose Maada Lebbie, pointed out that the Wellington PMB Fire disaster was an eye opener for all stakeholders in the transport sector to put hands on deck to improve safety of the roads. He assured that as an Oversight Committee on transport, they had instructed the SLRSA and the SLP to embark on the decongestion of roads in Freetown.

Honorable Lebbie called on the membership of the transport sector to collaborate with the decongestion exercise stating the SLP would be there to provide the necessary support to the SLRSA during the exercise.

The Assistant Inspector General of Police in charge of Traffic and Road Safety, Kaprr S. Kamara, thanked the Parliamentary Oversight Committee on Transport for supporting the initiative to decongest Freetown as the issue of street garages was a very serious challenge in Freetown. He assured that, the Sierra Leone Police would fully corporate for a successful exercise.

On behalf of the Motor Drivers Union, Alpha Amadu Bah, who is President of the Union assured of the cooperation of his membership.

Other stakeholders present were representatives of the Vehicle Maintenance Association, Kekeh Riders Union among others.