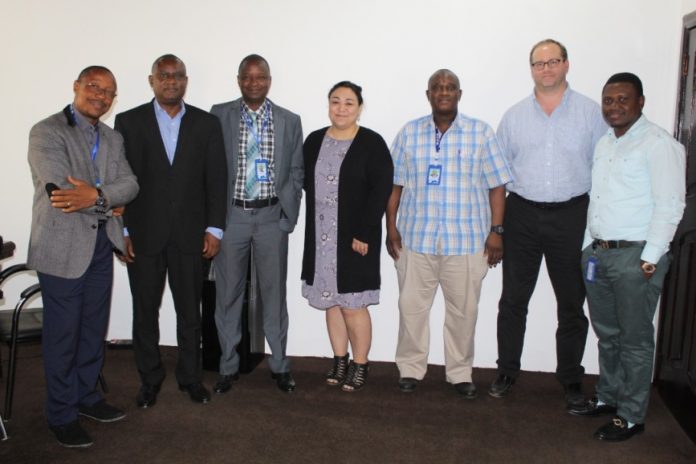 On Tuesday 7 January 2020, a visit by two Associate Professors from the John Hopkins Bloomberg School of Public health was paid to the offices of Stats SL where discussions were held between the Deputy Statistician General, Andrew Bob Johnny, on behalf of the Statistician General, Prof. Osman Sankoh and the visiting team on how the institution can collaborate in a study to be carried out by the Professors on Ebola Survivors in the country.

Speaking at the meeting, Associate Professor Philip Anglewicz, updated officials about the activities of his institution. He disclosed that the John Hopkins University is a private research university in Baltimore, Maryland in the United States, and is desirous of conducting an Ebola survivors study in the country. He said that the visit is aimed at finding a common ground of collaboration with Stats SL on the planned study. The research, he furthered, is important for the establishment of the social features of Ebola, especially as it is now about five years since the end of the epidemic. These social features, he said, have had little or no research done on them since the eradication of the virus in the country.

The research will focus on the long term impact of Ebola on people’s health and the demographic outcomes. He mentioned that his institution believes that Ebola can have more than just physical health impact and can further impact mental health, influence migration patterns and even impact marriage and child bearing.

In conclusion, he stated that the study will be done in early May and data collection is to start in July and end in October 2020. He disclosed that they got funding from the National Institute of Health in the US with a small grant to conduct this survey, but stated that they are hoping to get a larger grant that will trigger an Ebola study that will be nationally representative.

Giving her own take, Clinical Assistant Professor, Lina Moses, from the Tulane University School of Public Health and Tropical Medicine said that it has to be understood how Ebola survivors and communities that were affected by Ebola are doing now. She continued that their initial concept was to look at Ebola survivors and compare them to family members, household members and dependants of people who died from Ebola. In this respect, they will do a census of Ebola survivors in the eastern province and then the third group will be a population-based sample from the communities that were affected by Ebola. To successfully conduct this study, Associate Professor Moses said that the population size and enumeration areas have to be provided by Stats SL

In his response, Deputy Statistician General, Andrew Bob Johnny, assured both Associate Professors that Stats SL has a sample frame from the 2015 population and housing census, which has enumeration areas. He made it known to them that Stats SL has the required expertise in-house to collaborate and do the study. He asked that an MOU be done that will clearly demarcate lines of collaboration and partnership, spelling out who does what, when, how and where. After which, the concept of the study can be discussed before moving to field data collection, he said.

Being a GIS scientist himself, the Deputy Statistician General stressed the need for a spatial component to be included in the analysis of the research, so that beautiful maps indicating where the survivors are placed, together with other details will be provided. He reemphasized Stats SL’s commitment to collaborate on the study, especially when it hinges on a disease that affected most Sierra Leoneans in more than one way. He concluded by registering his appreciation to the team from John Hopkins for coming, whilst promising to pass on the key agreements and discussions from the meeting to his boss, the Statistician General, Prof Osman Sankoh, who was unavoidably absent.

Present at the meeting were the Director of Demographic, Health and Social Statistics, Sonia Jabbi, Director Of Censuses and Geographic Information System, Abdulai Brima, Director Of National Statistical Systems, Francis Tommy and the Director Of Communications and Public Relations, Samuel Ansumana. All made meaningful contributions to the discussion.