To raise awareness on afforestation in the country, Stop It Sierra Leone in partnership with the Sierra Leone Association of Journalists (SLAJ) has on Friday 24th January, 2020 launched the Trees 4 Schools Project at the Christ Church Primary School on Pademba Road in Freetown.

Executive Director of Stop It Sierra Leone, John Koroma, disclosed that our environment has been affected by climate change  saying such gave them the cause to join the global and national campaign to not only shout about climate change but also to take concrete steps to address its challenges. He added that Stop It Sierra Leone in partnership with the Sierra Leone Association of Journalists (SLAJ) is proud to launch the Trees 4 Schools Project.

With regards Education he told the audience how they are partnering with schools (33+) to provide sound educational programmes and activities that impact change on human rights of women, children and youth.

Dilating on Health aspect he informed how they are working  with the Government of Sierra Leone, especially the Ministry of Health and Sanitation its line agencies including local and international organizations on health monitoring, evaluation and other commitments affecting our targets populations.

“Last but not the least we focus on Human Development to provide long term livelihood support programmes for five categories of our women membership,” he underscored.

He said that the Trees 4 Schools Project was initiated to specifically help Government address climate change but with particular reference to learning institutions which have been highly exposed to deforestation and natural disasters such as wild winds which can cause damages to school facilities due to lack of trees, noting that the project covers 250 schools in the country selected from 5 districts with each district having 50 schools to benefit.

He applauded the President of Sierra Leone Association Journalists and members of the Fourth Estate for high demonstration of commitment to address climate change going beyond mere rhetoric as they have singlehandedly made the largest group donations to the project more than any other organization.

“Ladies and gentlemen, for the records, and first time in history, media practitioners say that they want to address climate change now more than ever before and they have demonstrated this by not just intending to write about it but contributing their monies where their interest is,” he asserted.

He informed the gathering that their target was Le 8, 750, 000 and it has far surpassed in pledges, adding that the total pledges made so far stand at Le 10, 500,000 of which, 75% of that sum has been paid with others still waiting to honour their pledges.

Highlighting the efforts made so far by the organization to the project to kick start he said they have signed an official purchasing agreement with agro-foresters for the purchase of the listed items of five categories of trees, opened a project account at the First International Bank, with SLAJ being a Co-Signatory.

He said the project is being implemented for the schools stressing how the trees are the properties of the schools. He therefore urged Principals and Head Teachers to take the responsibility to delegate authorities to students/pupils to protect the planted trees, as they will commit to monitor their progress and report.

He said that politicians are more concern in winning election rather than paying attention to critical issues that has the potential to destabilize our nation, adding that the partnership with Stop It Sierra Leone is a step in the right direction to protect and promote the country’s beautiful environment.

He assured them of his continuous support towards the Trees 4 Schools Project, which he believes will raise more awareness on the need for afforestation.

He disclosed that the Environment Protection Agency (EPA) is the body responsible for the effective protection and the management of the environment and in that regard he applauded the efforts made by Stop It Sierra Leone & SLAJ to bring together stakeholders in the trees 4 schools drive.

He said EPA also acknowledges the theme for the project as it is in complete agreement with the inclusive green growth development pathway that has been adopted in the New Direction Agenda, noting that in the mid-1940s, a devastating land slide occurred in which Charlotte Village and its immediate environs were buried.

Similarly, there was another experience on the 14th August, 2017 at Mortomeh community which he said should remind us of our grim responsibility to preserve the trees and replant where necessary not only to ensure the sustainability of the country’s infrastructural development and also our forests, which play a critical role in promoting food security as they provide nuts, berries, roots, meats and cooking fuel for communities.

He further recommended that disciplinary action be taken against those involve in deforestation activities in and around the school grounds, noting that trees are State assets that must be maintained for the sake of the future generations.

He ended by saying Government and other relevant institutions that the agency is always willing to partner and give support to environmental efforts in ensuring environmental sustainability and to combat climate change. 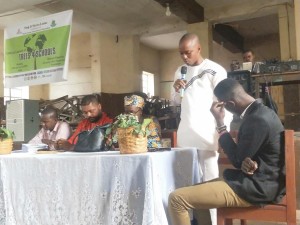