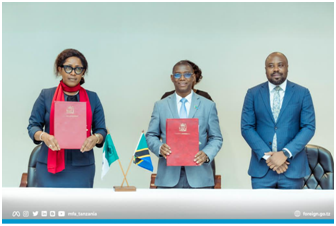 Citizens of Tanzania in East Africa are reportedly jubilating and full of praise for Sierra Leone’s former Finance of Minister I, Patricia Laverly after she completed the Signing Ceremony for Loan and Grant Agreements for the Tanzania Agricultural Inputs Support Project (TAISP) on 18th August, 2022.

With billions of United States Dollars in her portfolio to support various developmental projects in Tanzania, in her capacity as African Development Bank (AfDB) Country Manager for Tanzania, Patricia  Laverly, informed her distinguished audience which included Tanzania’s Permanent Secretary in the Ministry of Finance and Planning, Emmanuel Tutuba, Tanzania’s Permanent Secretary in the Ministry of Agriculture, Dr. Andrew Masawe, Directors and Government Representatives, that on behalf of the African Development Bank, she expresses the Bank’s sincere gratitude to participate in the Loan and Grant Signing Ceremony for the Tanzania Agricultural Inputs Support Project (TAISP).

She further said the project is part of the Bank’s emergency response to the Russia-Ukraine conflict. “Just when we thought we had plans in place to cushion the impacts from COVID-19, combined with the effects of climate change, countries across Africa faced new challenges with high prices for fuel and fertilizer, and these continue to adversely affect poverty and food security,” she said.

According to her, increase in the cost of edible oils and wheat is affecting all households in Tanzania but hitting the poorest most severely. She added that recent estimates show that the combined food, fuel, and fertilizer shocks will lead to an additional 1.2 million people falling below the poverty line in Tanzania.

The fertilizer shock, she noted, is most detrimental for poorer rural households, which rely more heavily on agriculture for their income and spend a larger share of their income on food.

She maintained that the analysis shows that reduced fertilizer availability and use in response to higher prices, will lead to real GDP contraction by 1.3 percent in Tanzania. “It is against this background that the Government of the United Republic of Tanzania requested support from the Bank to address these challenges through the implementation of the Tanzania Agricultural Inputs Support project (TAISP),” Mrs. Laverly stated.

She went on to state that “hence, in response to the Government of Tanzania’s request, on 15th July 2022 the Board of the African Development Fund approved UA 54.41 million, an equivalent of USD75.5 million in the form of a loan and grant to support the implementation of Tanzania Agricultural Inputs Support Project (TAISP). Out of this amount, UA 52.59 million (equivalent of USD 73 million) was approved as a concessional loan and the remaining UA 1.82 (equivalent of USD 2.5 million) as a grant.”

She further noted that the overall goal of this agricultural input support project is to boost local food production and strengthen the resilience of food systems to mitigate short- and long-term risks due to the Ukraine – Russia crisis and climate-induced stress in the country. “Specifically, this project will improve production, productivity, and profitability of priority crops (wheat, sunflower, and rice) by scaling-up the delivery of affordable inputs to smallholder farmers in the targeted areas. The project is structured in three components: (i) Scaling up food production; (ii) Financing fertilizer availability and affordability; and (iii) Enabling policy environment and institutional strengthening.,” she said, adding that “most importantly, this project is consistent with the Government of Tanzania’s priorities, the Bank’s Ten Year Strategy (TYS), our High-Five Strategic Operational Priorities, as well as our Tanzania Country Strategy Paper (CSP 2021-2025).”

She explained that the project will be implemented over a period of three years, and will focus on improving production, productivity, and reducing post-harvest losses of the priority crops (wheat, sunflower and rice) in selected districts: Arusha, Dodoma, Kilimanjaro, Manyara, Mbeya, Morogoro, Njombe, Rukwa, Singida and Songwe.”

She confirmed that the end result will be additional production of one million tons of food, which will directly benefit 1,200,000 households corresponding to 4,800,000 persons, including 40% women and youth.

She informed her audience that “to ensure outcomes are realized, the project will use the combination of investments in (i) rapid production, multiplication, and large-scale delivery of certified seeds of climate resilient and market-preferred varieties of the three crops (wheat, sunflower and rice); (ii) financing bulk purchase and production of fertilizers using trade credit guarantees; (iii) leveraging digital technologies for the delivery of smart subsidies of certified seeds and fertilizers to ensure transparency and inclusion, especially targeting women; (iv) strengthening extension services to promote good agronomic practices, greater fertilizer use efficiency and reduction of postharvest losses; and (v) implementing policy commitments to address the structural factors that prevent modern inputs from reaching farmers.”

She added that the Bank offers its sincere appreciation for the great work done by the Government of Tanzania Team including the Ministry of Finance and Planning, Ministry of Agriculture, and others who significantly contributed to the successful processing of this project. “The Bank encourages keeping the same team spirit during the implementation of the project so that we can achieve the intended objectives within the agreed time frame,” she stated, adding that “on behalf of the African Development Bank Group, I would like to reaffirm our firm commitment in supporting the Government and people of the United Republic of Tanzania in their efforts to realize their development aspirations.” 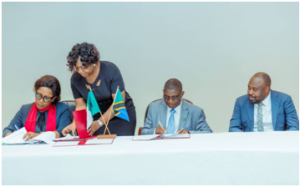 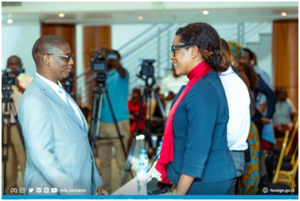