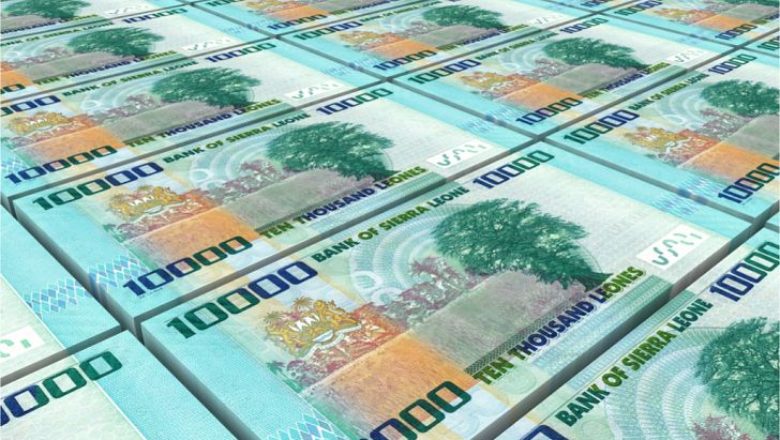 Sierra Leone’s currency, the Leone, has lost over 100 percent of its value to the US Dollar since 2016, according to Bank of Sierra Leone. The Bank noticed the general public in a press release dated 20 August, 2019 that it is illegal under the country’s laws to quote prices in foreign currencies. The law states that all prices in the domestic market have to be in Leones. However, Bank of Sierra Leone operates in a setting of weak law enforcement.

Therefore, section 26 (4) of the Bank of Sierra Leone Act, 2019 are largely violated. Large part of the economy is dollarized with impunity. The prices of renting a house, booking for hotel and flight ticket, renting a car, consulting fees, wages of foreign workers are among the economic activities largely quoted in US Dollars instead of the legal tender, the Leone.

However, illegal dollarization is not the only currency problems of Sierra Leone. Bank of Sierra Leone depends heavily on exports), especially exports of minerals, to build its foreign exchange reserves to be able to influence the exchange rate of the Leone in the international foreign exchange market. However, export of minerals is very volatile. The share of mineral exports fell from 90 percent in 2013 to 30 percent in 2018, according to latest figures from the National Advocacy Coalition on Extractives (NACE).

Even a booming natural resource sector in the early 2010s could not make the exchange rate appreciate; suggesting that the exchange rate in Sierra Leone depends little on capital inflows, including Foreign Direct Investment (FDI) in mineral extraction, in agriculture, in manufacturing, in construction and service, international aid, loans from lending institutions such as the World Bank and IMF, remittance etc.

It seems the real exchange rate is more depended on terms of trade (import and export) than capital inflows. The prices of exports including minerals, agriculture and manufacturing are fixed in the international market. Exports of minerals have fallen so sharply primarily because of the dramatic fall in prices of minerals in the international market since 2013. Moreover, capital inflows have favored natural resources at the expense of agriculture and manufacturing.  It suggests that government contractors, especially in construction and service, are the winners and famers and local producers are the losers in a booming natural resource economy.

Sierra Leone imports almost everything including high-tech goods, fuel, basic staple and textile to meet local demand. High food imports reflect the trade deficit problems or rapid depreciation of the exchange rate. The Ministry of Agriculture said last year that Sierra Leone spent $350-400 million on food imports alone, about 10 percent of the GDP in 2018. It implies that the low productivity of agriculture and manufacturing sectors contribute greatly to weak currency or sharp depreciation of the exchange rate.

Government spending in construction and service is perceived to have falling dramatically over the years like exports of minerals. The government depends heavily on mineral revenue to construct roads and houses, provide public service such as education, healthcare, and transportation. Therefore, Sierra Leone’s economy has been suffering from a very painful recession since 2013. The World Bank says on its website that “Sierra Leone’s economy grew by 7.8 percent on average during 2003-2014 but contracted by 21 percent in 2015 following the Ebola outbreak and a decline in the price of iron ore, the main export product”.

The currency crisis has intensified further inequality and poverty. The 7 million residents of this former British colony have a GNI per capita of only $500 in 2018, according to the World Bank.  Sierra Leone ranked 184 out of 189 countries in the United Nations Human Development Index (HDI) in 2018, figures from United Nations Population Fund (UNFPA) in 2017 shows that the West African country surfers from one of the world’s highest maternal mortality ratio of 1,165 deaths per 100,000 live births.

The above discussion suggests that currency or the monetary economy could be a curse rather than a blessing in a setting of weak law enforcement. Therefore, Sierra Leone must implement its laws to boost the Leone. Authorities will have to clamp down on black markets or parallel economies including illegal dollarization fraught with corruption, money laundering and organized crime. The private sector will continue to quote prices in US Dollar with impunity if local laws such as the Bank of Sierra Leone Act, 2019 are not effectively enforced.

Moreover, FDI, especially in mineral extraction, would contribute less to job creation, economic growth and institutional building if the laws are largely violated.  NACE says contribution of mineral extraction to GDP fell from 1.4 percent in 2013 to 0.7 percent in 2019. Therefore, agriculture and manufacturing policies must be geared towards increasing local production that might help reduce imports and help boost the Leone in the international currency market.

The private sector could also contribute less to local productivity if FDI does not employ nationals. The Local Content Act of 2016 that makes provisions for the private sector to employ citizens must be implemented. Effective law enforcement and empowering and training citizens might reduce the number of foreign workers. Nobody knows with precision how much the Leone loses value to the US Dollar whenever foreign workers and companies repatriate their wages and profits to their respective countries.

However, the laws could not implement themselves. Strong and accountable state, political and social institutions are needed. Protecting citizen’s rights to voice their concerns and grievances is a first step toward building social institutions that could, among other things, demand that laws be implemented. The more voices are heard the more Sierra Leoneans might perceive a strong, self-interested stake and mobilize to defend their political and economic wellbeing. Stakeholders including government of Sierra Leone and development partners, civil society and media should promote reforms aimed at protecting civil liberty and human rights.