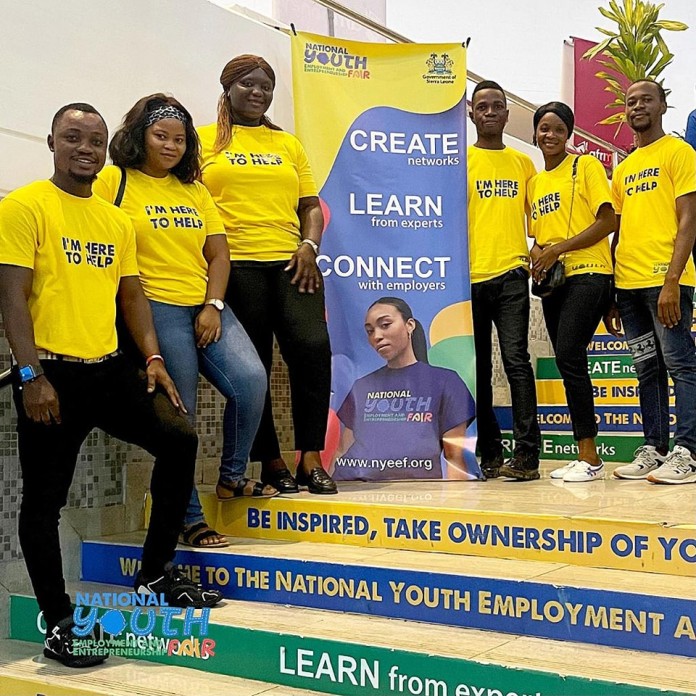 The National Youth Employment and Entrepreneurship Fair (NYEEF) launched on Tuesday 15th November with an exhilarating Opening Ceremony. The event, which commenced with live music from Telem, was well attended with numerous dignitaries present, including the President and Vice President of Sierra Leone, Minister of Youth and Culture in Rwanda, Government Ministers, Members of Parliament, Members of the Diplomatic Corp and Development Partners, in addition to distinguished guests, partners, sponsors and participants of the NYEEF.

The Vice President of Sierra Leone, Hon. Dr. Mohamed Juldeh Jalloh welcomed the audience to the “maiden edition” of the NYEEF, which he explained in his speech was “a part of His Excellency’s Human Capital Development agenda designed to invest in the young people of Sierra Leone to unleash their potential in order to access jobs.” He continued: “We see this event as an occasion to bring job seekers and young entrepreneurs to connect with employers and experienced entrepreneurs and to establish beneficial relationships that may support their future career prospects.” Over 500 young people between the ages of 18 – 35 from all 16 districts across the country participated, including participants with disabilities and over 200 women in accordance with the NYEEFs inclusion policy. When asked why it was important for young women to participate, Hon. Dr. Mohamed Juldeh Jalloh, said: “Young women constitute a large majority of the skilled youths. There is no better way to demonstrate our investment in women’s empowerment than by providing young women with skills and job opportunities.” He also mentioned that there would be “custom-made training and mentoring” at the NYEEF, and assured the audience that the momentum would continue after the three days. He said: “We have been engaging the partners and employers here at this event to create internships for the participants”.

The guest of honour, Minister of Youth and Culture in Rwanda, Hon. Rosemary Mbabazi, travelled to Sierra Leone especially for the NYEEF. She said it was her very first visit to the country and she felt it “was important to show support to the Government of Sierra Leone and share Rwanda’s experience in youth employment and entrepreneurship.” In her speech, she gave a message to the NYEEF participants: “Remember that it’s not what my country can do for me, but what can I do for my country?” On behalf of the Government of Sierra Leone and her Ministry, Hon. Rosemary Mbabazi made a pledge to the participants. She said: “We will be behind you, cheering you on and supporting you.”

The Minister of Youth Affairs, Hon. Mohamed Orman Bangura, gave a moving speech illustrated with his inspirational life story. He reaffirmed the NYEEF tagline that young people in Sierra Leone need to do their part to “take ownership of their future career”. In his speech, he said: “Young people, your destiny is in your hands, take control!”

His Excellency The President of Sierra Leone, Julius Maada Bio, closed the Opening Ceremony with a heartfelt speech. His encouraging words to “be bold” echoed throughout the auditorium, and his genuine concern for young people in Sierra Leone indicated to each and every person present that the NYEEF was going to be a truly remarkable event.

Following the Opening Ceremony, the President and Vice President of Sierra Leone took a tour around the Freetown International Conference Centre. Firstly, they visited the employers’ booths in which over 40 companies in Sierra Leone were represented. This included companies from a wide range of sectors including mining, energy, banking, agribusiness, manufacturing and public service such as the army and the police.

The next stop on the tour was a visit to the Business Etiquette workshop facilitated by the Founder of Sigiay Group Ltd, Sama Forna-King. Participants had the honour of the President and Vice President of Sierra Leone sitting in on their workshop. Furthermore, His Excellency Julius Maada Bio, gave his own token of advice to attendees of the workshop. He said: “It is how you comport yourself and carry yourself…” Other workshops held that morning were Business Etiquette, facilitated by Farida Bassa-Rivera of Insight Consulting and Communication Skills, facilitated by Andrea Williams of AfRecruit and Tafadzwa Chiganga of Grow Salone.

Undoubtedly, it was an unforgettable first day at the NYEEF. Amongst the multiple highlights, the live performances by Drizilik, Solo’s Beat and Markmuday were the cherry on top.

On the second day, participants were ready and raring to “CREATE networks LEARN from experts CONNECT with employers” as stated on their NYEEF t-shirts. It kicked off with the Cultivating Youth Resilience conversation, in which the Executive Director of YouthConnekt Africa, Oulie Keita participated. Young entrepreneurs displayed their products at the entrance of the Freetown International Conference Centre. Companies such as Shea & More, Revive & Glow and Abie’s showcased local content from young, female entrepreneurs in Sierra Leone. Moreover, handmade handbags and jewellery made by young women in the Sierra Leone Correctional Centre were also on sale, with all proceeds going towards their skills development and legal representation fees.

One of the well-received workshops was Critical Thinking and Problem Solving by the Founder of Afriqia HR Solutions, Maryam Darwich. A participant at the NYEEF, Clement Puee, said: “We were encouraged to stay curious and never stop asking questions. We played a fun game and I learnt techniques on how to solve issues in the workplace.” Other workshops were Digital Tools for Entrepreneurs and Job Seekers, facilitated by Tanya Phiri of UNICEF and Financing Options for Entrepreneurs, which saw presentations from CONET and Innovation SL.

Last month, the Vice President of Sierra Leone, Hon. Dr. Mohamed Juldeh Jalloh, was asked what he hoped the NYEEF would achieve. He said: “We want to create a space that would allow job seekers and potential employers to discuss the skills required in order to gain employment.” The Human Resources Manager at Africell, Patricia Jangah, helped accomplish that goal. She patiently provided individual career advice, CV guidance and essential interview tips.

Orange introduced a contest for participants at the NYEEF to pitch their ideas on stage in front of three judges for a chance to win NLe 5,000. Out of 32 courageous aspiring entrepreneurs, two winners emerged. One of them, Etta Vandy said: “I’m so grateful for this opportunity. I’ve had the best two days at the NYEEF!”

On the third day, participants were just as bright-eyed and bushy-tailed as the first. They had formed a queue to sign in from 7 AM and were eager to make the most out of their final day. The Ask Me Anything panel by the Founder of Elba SL, Edleen Elba, and the Business Canvas Model workshop by the Founder of Innovation SL, Francis Stevens George were tailored for aspiring entrepreneurs in the process of developing their businesses. Additionally, female entrepreneurs were invited to join the interactive Women in Business session by the Founder of Women Mean Business, Ajara Bomah. A platform was provided to present their business, learn about the power of branding, discuss the challenges in Sierra Leone and share solutions with each other.

Throughout the three days, Meet The Employers sessions focused on a diverse range of sectors including telecommunications, construction, energy, mining, agribusiness, manufacturing, banking, finance, public service, transport and aviation. They provided an opportunity for young people who missed out on being a participant at the NYEEF to also join, learn and network.

Overall, the NYEEF was an impressive event that exceeded all expectations. One of the participants, Christiana Banja-Sesay said: “The NYEEF was exceptionally great. The best ever!” Another participant, Ramdul Kargbo, commented: “It was engaging, educational and inspiring. I hope it takes place every year.” Finally, Sallieu Sankoh thanked the NYEEF “for creating this timely and amazing event”.

During the Closing Ceremony, the Vice President of Sierra Leone, Hon. Dr. Mohamed Juldeh Jalloh, gave the final speech. He congratulated participants, promised continued support for young people and reassured the audience that the NYEEF was only the beginning. He closed the historic event on a high note with his announcement of a National Internship and Apprenticeship Programme.