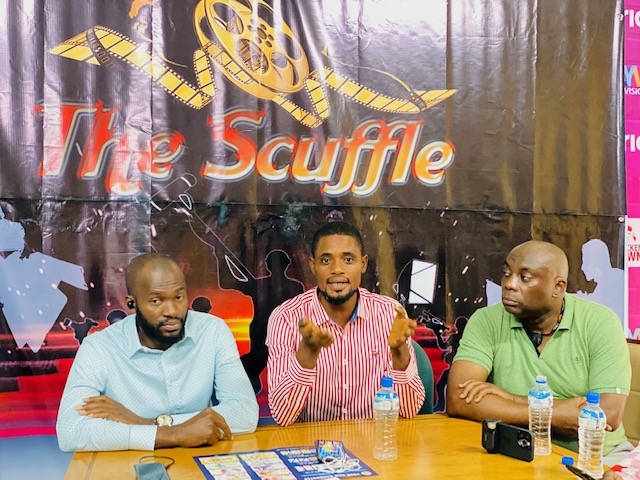 During a well-attended programme held on 7th May 2022 at Africa Young Voices Media Empire Conference Hall in Freetown, Kid-Afan Films, in collaboration with the Media Evangelical Drama Ministry unveiled, “The Scuffle Film Project”, a movie project from a Sierra Leonean story hoping to be required by Netflix.

Giving a narrative of the movie, one of the Executive producers of the movie, John Afam, revealed how the movie has a political  connotation featuring a vibrant, strong and principled lady, Dr. Keita, as an advocate for justice, determined to put an end to all forms of injustice against the weak and helpless especially women.

He added that Dr. Keita steps out into a front reserved for men and fought for  change to become the first female President of the country of Sierra Leone, bringing forth several strong reasons why she thinks she is a better ruler than the 90 percent men ..

He called on all to watch out how the heat of the SCUFFLE unravels hate in love as Dr. Keita fights her husband, who also wants to become Head of State.

John Afam said the movie will be on Netflix and there are different personalities from Ghana, Nigeria who are ready to invest in the said movie also disclosing that it will open up a lot of opportunities for Sierra Leoneans.

He informed all that audition started on the 7th May, 2022 and interested actors and actresses who want to be part of the project could send a one minute audition video to +232 902265, disclosing that the audition will end on the 13th May 2022.

Executive Director of Kid-Afan Dr.Isatu Kakay Diallo said when ever she looks at the Sierra Leone film industry she knows a lot of things need to be done and there is a lot of gender disparity but expressed the hope that the new movie will bring opportunities because many people will be empowered and the movie will also create job opportunities for Sierra Leoneans even though there are challenges. She said people should open their minds to the movie and  look forward to greatness.

Daramy A Kabba said the movie is not only considered as a Sierra Leonean movie but an African one as well as they want to change the mentality of Sierra Leonean and project the image of a beautiful country.

He further that ninety nine percent of those featured in the said movie are Sierra Leoneans and only one percent are foreigners attributing such to things that are lacking in the nation’s film industry which he said they need to learn.

The Deputy Commissioner General of Dubai Expo 2020 Sierra Leonean team, Dr. Tony Morgan commended the team for its initiative maintaining that it is a laudable venture geared towards developing the country’s film industry.

He called on all to support the project which he maintains will definitely change the film industry in the country.

Closing the event was the officially unveiling of The Scuffle Film Project by the Executive Director of Kid-Afan, Dr. Isatu Kakay Diallo.