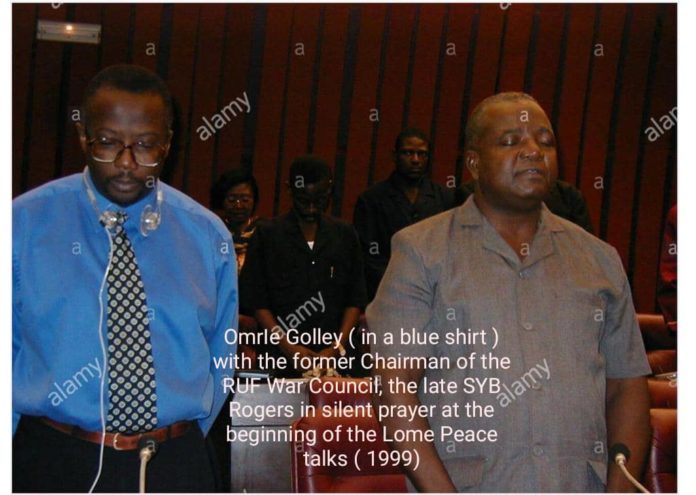 The countdown to the commencement of the Lome Peace Talks started in mid-March 1999 with the arrival in Lome, capital city of the Republic of Togo of the initial RUF Delegation comprising Ambassador Omrie Golley and erstwhile senior military adviser of the RUF, Ibrahim Balde.

Ambassador Golley had been introduced to Balde in Monrovia, Liberia, in early March 1999. Balde accompanied Golley to the RUF meeting in Buedu, eastern Sierra Leone, referred to in the last episode. Balde had assisted in advancing the peace process emerging during this period, and had accompanied Golley during his meetings with sub regional leaders, prior to their arrival in Lome Togo, for the intra RUF consultations, and later the substantive Lome Peace Talks.

Ambassador Golley remembers his interaction with Balde during this time:

‘Balde was soft spoken, a gentleman with an almost encyclopedic knowledge of most of the leaders of the sub-region at that time, most of whom also knew him personally. He looked forward to seeing Sierra Leone free from conflict’.

Upon arrival in Lome, Ambassador Golley proceeded to a meeting with former President of Togo, the Late Gnassingbe Eyadema, who had agreed to mediate and host peace talks between the Government of Sierra Leone and the RUF.

Following this meeting, Ambassador Golley proceeded to Burkina Faso with Balde, where he briefed erstwhile President Blaise Campaore on the arrangements being concluded for discussions in Lome between RUF officials, as well as on the pending peace talks between the Government of Sierra Leone and the RUF.

Ambassador Golley also undertook visits to Ghana and Ivory Coast, returning to Lome on the 17th April 1999, on the eve of the arrival of the RUF Leader, Corporal Foday Sankoh.

On the 18th April 1999, Foday Sankoh arrived in Lome, for the commencement of discussions with his commanders, as well as to lead the RUF delegation into peace talks.

For Ambassador Golley, who had not seen the RUF Leader since their initial meeting in Yamassoukro, Republic of Ivory Coast three years earlier in 1996, this was a defining moment in the quest for a process that he fervently hoped, would lead to a lasting peace in his motherland.

Ambassador Golley was, however, under no illusion, that whilst the release of Sankoh offered a great opportunity for peace to return, the impending discussions and meetings ahead between the Tejan Kabbah Government and the RUF, would be difficult for both sides in the coming weeks.

Ambassador Golley’s initial meeting with Sankoh on his arrival in Lome was pleasant enough. Sankoh thanked Golley for all he had done to advocate for his release to attend the talks, and went on to inform of his time in detention in both Nigeria and Sierra Leone. Sankoh also spoke of conversations that he had had with President Tejan Kabbah, and indicated that if Kabbah was serious for peace, then it could be attainable.

For Ambassador Golley however, that encounter left him slightly troubled.

“Whilst it was pleasing to see Sankoh in person and seemingly in good health, I couldn’t but notice a change in his overall behaviour, since our last meeting in the Republic of Ivory Coast. I found Sankoh more aggressive generally, convinced of his own divine destiny, scathing of individuals within the Government, and more surprisingly, of military commanders and officials from his own Movement, that he had not even seen in recent times.”

Sankoh also appeared concerned about his own place within the movement he created, wondering whether his senior commanders would still accept his authority and command.

This general attitude and behaviour of Foday Sankoh created a pervasive atmosphere for the entire duration of the peace talks.

Meanwhile the delegation of RUF officials chosen for the intra RUF discussions arrived in Lome and the meetings began. In addition the final delegation to lead the RUF into talks with the Government was chosen, and on the 26th May 1999, the Lome Peace Talks commenced with much fanfare, after the arrival of the delegation representing the Government of Sierra Leone, and headed by their erstwhile Attorney-General and Minister of Justice, Solomon Berewa.

The Lome Peace Talks began with cordiality and informality emanating from both sides, but soon became bogged down on the issue of the legal position of the RUF Leader Foday Sankoh, given that Sankoh was still facing treason charges in Freetown, with the Government of Tejan Kabbah insisting that Sankoh continue with legal proceedings upon the conclusion of the peace talks that were already underway.

For Ambassador Golley, the position of the Government of Sierra Leone on this particular issue was untenable. He believed that it was particularly important, not only for the success of the peace talks, but also for prospect of lasting peace, that the RUF leader was free to lead his Movement into deliberations with the Government at that  time.

‘You cannot expect the man (Sankoh ) to negotiate with his jailers while he is shackled and chained.’

This thorny issue of the legal position of the RUF Leader nearly led to the complete breakdown of the talks. Additionally senior commanders of the RUF remaining in Sierra Leone while talks were being held, were threatening to commence military offensives generally, and not complying with any directives from their Leader regarding cessation of hostilities.

This matter was resolved, with a subsequent statement by the Government Delegation, in a briefing paper they subsequently prepared and released, intimating that President Kabbah was prepared to release Sankoh as the price for lasting peace in Sierra Leone.

Ambassador Golley remained very closely involved with the direction and progress of the Lome talks during this period.  The Leader of the Movement, Foday Sankoh, had decided against leading the RUF into peace negotiations, with the Chairman of the War Council of the RUF, the late SYB Rogers, leading the delegation at the talks.

As Legal Representative and Spokesman however, Ambassador Golley, as a member of the negotiating team, had to face the brunt of conveying the position of the RUF to the international media when necessary, but more importantly, was expected to advise on aspects of law and international practice when called upon.

Golley also had to interact on a daily basis with RUF Leader Foday Sankoh, who was feared by his own commanders and his entourage, with a mercurial psychotic temperament. This made the whole peace process even more difficult, and at times debilitating.

Ambassador Golley found the whole experience at Lome at times overwhelming. He remembers the experience:

‘Both delegations were lodged by the Togolese authorities, in the same hotel in Lome, the Deux Fevrier, within close proximity to each other.

My room was allocated just next door to the Suite of the RUF Leader, which did not help my desire for privacy on occasion. There were a constant stream of people clamoring to see Sankoh, many of whom would come round to my room to engage me initially.  At times I was even used as a barometer, by people enquiring about the mood of Sankoh, prior to seeing him’.

‘Foday Sankoh was a complicated man with a   multiplicity of emotions.  Privately he was deeply insecure, with an overwhelming distrust of people around him. He eschewed intellectuals and educated people, but at the same recognized the importance of their role within the Movement.

Sankoh had decided earlier on in the process, not to be directly involved with the peace meetings. That did not however stop him from convening meetings with the RUF delegates every evening whilst talks progressed, to enquire into every facet of the discussions previously held, and also directing the delegates as to negotiating positions to be used, the next day. ‘

Ambassador Golley also remembers the relationship between Sankoh and the Government of Sierra Leone during this period in Lome:

‘Foday Sankoh spoke to Tejan Kabbah directly on the phone on many occasions for the duration of our sojourn in Lome. His relationship with members of the Government of Sierra Leone Delegation also appeared quite cordial. ‘

Meanwhile at the Peace Talks proper, negotiations were difficult, often tortuous, at times hostile, and difficult for both sides. The issue of the inclusion of the RUF into governance was, understandably, a very difficult and protracted issue for the Kabbah Government to accept and agree to.

Although this matter had been aired in briefing and position papers by both sides to the talks prior to the Lome meeting, in reality, it was very difficult to accept on the peace table.

The issue of an Amnesty for those directly involved in the war was another difficult issue, and the difficulties encountered in discussing and reaching an agreement on this matter, can be seen with the subsequent amendments at the conclusion of the peace talks, of the earlier provisions agreed upon, and the subsequent clarifications on the position of the United Nations, regarding the Amnesty provisions, during the signing of the Accord proper in July 1999.

For Ambassador Omrie Golley however, the convening of the Lome talks, offered his country a real opportunity for a cessation of hostilities and the chance of lasting peace. He fervently believed that whatever the outcome of the Lome talks, that excellent opportunities existed for a genuine and lasting peace. To that extent, as the talks progressed Golley started thinking of his own exit from the peace talks.

He decided to do this in stages. The first step was occasioned by him departing from the Hotel Deux Fevrier, where the RUF and Sierra Leone delegations were being housed, and moving to another hotel, a few kilometres away. He also arranged for members of his family to join him there.

This development irked the RUF Leader, who wanted Ambassador Golley to remain at the hotel, where the rest of his delegations were residing. Golley however wanted more privacy, and in any event, felt that the time was fast approaching,  for a quiet exit from the peace talks that he had worked hard to convene.

The second issue, related to the question of his name being included in the list of officials  from the RUF, who were to join the Government of Tejan Kabbah, after the  signing of the Lome Peace Accord, as part of its provisions. In fact Ambassador Golley was informed by the RUF Leader that he ( Sankoh ) wanted Golley to be included in the RUF list of proposed Cabinet  to be submitted. This happened on two occasions.

However for Golley, joining the Tejan Kabbah Government as an RUF Cabinet Minister, was not something he was prepared to accept or join. For him, the most important prize was a lasting and sustainable peace in his motherland, after Lome.

After weeks of deliberations, a Peace Accord was agreed upon and signed in July 1999.

Ambassador Golley however, one of the driving forces behind the convening of the meeting at Lome, and one of the main architects of the peace process generally, did not attend the signing ceremony. For him, his mission, up to this point in time, had been accomplished.

Ambassador Golley left Lome quietly a fortnight before the signing ceremony, and proceeded to Europe, again to his law practice and his family.

For further enquiries on our episodes, please contact the writer: