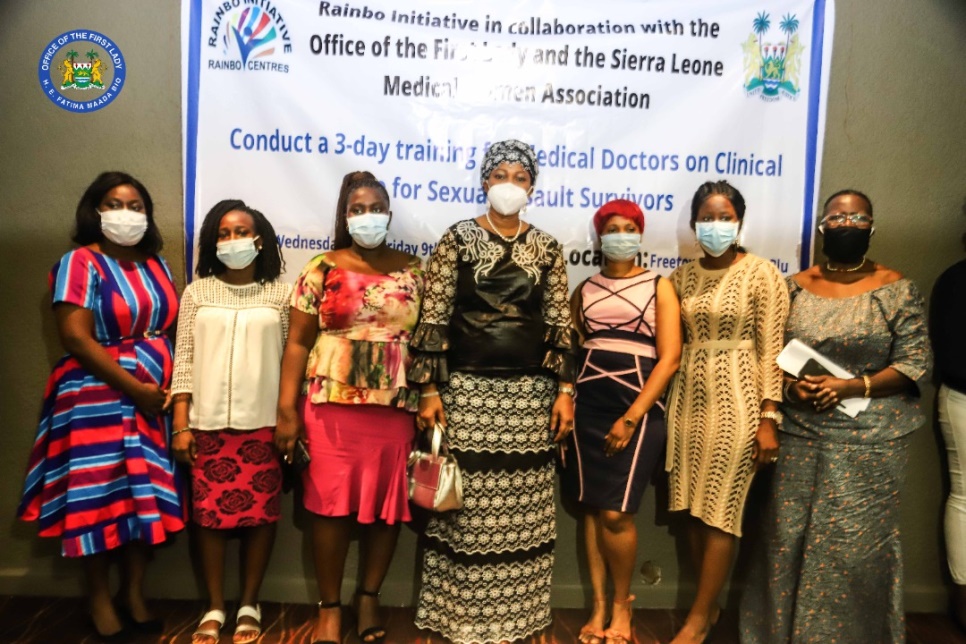 Giving an update on the background of the training, Dr. Olabisi Cole, stated that the commencement of the training marks a milestone in the fight against the sexual assault surge in the country as a team of experts will train 35 medical doctors to further empower them to deal with Sexual and Gender-Based Violence issues, particularly clinical care for sexual assault survivors.

She furthered that the objectives of the training exercise are geared towards sensitizing and educating doctors in order for them to be able to provide free quality forensic medical care to victims of sexual and gender-based violence (SGBV).

She also added that the training is to give the participants an opportunity to improve on coordination and networking, provide vital service to survivors.

Madam Olabisi went on to state that, the training is also to motivate national stakeholders to participate in clinical management and care of intimate partners and SGBV survivors, while it is to also ensure that doctors are provided with the skills and knowledge to feel confident and comfortable in writing medical certificate and in producing evidence in court, thereby assist in the persecution process aimed at giving justice to survivors.

The President of the Sierra Leone Medical Women’s Association, Dr. Francess Wurie in her statement disclosed that the active involvement of women in any sphere of development is bound to be successful, stating that they want to be involved in issues affecting women and girls in society saying which is why the Association has a specific interest in discussing potential avenues in preventing SGBV and also providing care for survivors of SGBV in Sierra Leone.

She went on to extend  appreciation to the First Lady and her partners for such an intervention, while she appealed to the Ministry of Gender and Children Affairs and also the Ministry of Health and Sanitation to adequately provide all necessary supplies in all the one-stop centers across the districts.

Rainbow Initiative representative, Daniel, explained that, their institution is a national organization that is passionate to end SGBV in Sierra Leone. He stated that to actualize their vision as an organization, they have been working with many players including Government, donors and other partners to ensure that they effectively play their role in ending SGBV in the country.

Kettoh stated that, they are currently working with Government and other organizations to provide service delivery at the community base level, where the Rainbow Center is not operating.

He thanked the President and First Lady for their unwavering interests to protect women and girls and said it is as a result of such interests that is why they are now experiencing a rate high of reported cases right across the country, as survivors now have the courage to come out willingly to report SGBV issues.

The Head of Family Support Unit (FSU), Fatmata Kamara intimated that as a unit they were looking forward to this all-important training, as medical examination and treatment have been challenges the FSU had been facing over the years and now that the answer is at their doorstep, they will re-double their strides to eliminate the menace in society, stating that additional doctors to provide medical service means it is action time now.

She said the FSU has intensified its fight against SGBV with emphasis placed on SGBV against minors disclosing how they have set up a Secretariat at the FSU headquarters and appointed a female Police Officer to provide oversight during the investigation and act as a liaison between the FSU and the Law Officers Department.

The First lady of the Republic of Sierra Leone, Madam Fatima Maada Bio while delivering her remarks extended her heartfelt appreciation to Dr. Olabisi Cole for her commitment and consistency to the cause and stated, “it is actually not nice when you have men that believe in inequality”.

Her Excellency reminded all doctors present that the fight against sexual assault and rape is not a one-man business, but a collective responsibility, as after the Hands Off Our Girls Campaign, the rapid rise in rape cases has become alarming.

Madam Fatima furthered that if all come together and speak with one voice, much could be achieved stating that the systemic and institutional change in the fight of this magnitude will forever remain in the country. She said, “the people cannot be silenced, as it is their legal right to protect their children”.