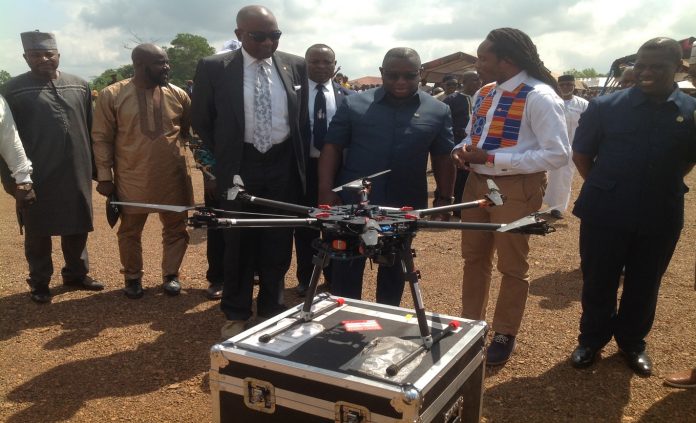 In an unprecedented move, President of the Republic of Sierra Leone and Chancellor of Njala University, His Excellency President Julius Maada Bio has officially launched the National Drone Corridor. The national drone corridor which is spearheaded by DSTI, Njala University, UNICEF, and the Civil Aviation Authority is said to be the first national government led initiative in West Africa and second in Africa.

The ceremony attracted members from the Diplomatic and Consular Corps, UNICEF, Ministers of Government including the Chief Minister, Minister of Health and Sanitation, Internal Affairs, Minster of Technical and Higher Education, Minister of Basic and Senior  Secondary Education among others.

In his opening courtesies, Vice Chancellor and Principal, Njala University, Professor Abdullah Mansaray described the launch of the National Drone Corridor as a celebration of the success of partnership among Directorate of Science. Technology & Innovation, (DSTI), the Civil Aviation Authority, UNICEF, Njala University and the local communities in Kori chiefdom.

Having being challenged by President Bio during inauguration of the Njala University Court, to ‘’think big’’ and to transform Njala into an institution that meets the challenges of the 21st Century, Professor Mansaray said the National Drone Launch is one of the many achievements and testaments of the tremendous strides taken under his leadership within this short time with the support of staff, and development partners in harnessing technology for national development, hence he is particularly pleased that such a remarkable technological revolution is happening under his leadership.

Making a statement, Chief Innovation Officer who now doubles as the Minister of Basic and Senior  Secondary Education said as part of Sierra Leone’s National Innovation and Digital Strategy and their recent investments in GIS, Sierra Leone will provide the platform for digital governance to accelerate the development challenges. Dr. Moinina David Senge averred that Sierra Leone is the first country in West Africa and second in Africa to have a Government-led drone corridor which he said is purely a collaboration among DSTI, Njala University, UNICEF, Sierra Leone Civil Aviation Authority and many visionary yes-Sayers. The Drone Corridor has a full 250m runway for fixed wing drones, an attached research facility for industrial and a whole set of use cases in health, agriculture, and education. ‘The impact of today cannot be understood with a view of yesterday which is why it was a Phenomenal to have 100+ children on site’’, he opined.

UNICEF Country Representative to Sierra Leone, Sulaiman Brima lauded the initiative and commended President Julius Maada Bio for his consistency in prioritizing science and technology and urged them to replicate the initiative to other parts of the country. He said drones can form a key part of the solution to save lives; hence, UNICEF remains deeply committed to continue the partnership and support in any way and also pledged UNICEF’S unflinching commitments to support the use of drones for social good and optimally to support the improvement of children.

Paramount Chief of Kori Chiefdom, PC Thomas Gbappie IV pledged his chiefdom’s unwavering support to the initiative and promised to offer more lands for development and for the good of the chiefdom. He commended their ancestors for the forthright thinking in leasing parcel of land to Njala University which to date has been a mammoth blessing for the people of Kori Chiefdom and the country as a whole.

In his keynote note address, the President of the Republic of Sierra Leone, His Excellency Retired Brigadier Julius Maada Bio affirmed that the people of Sierra Leone have already seen how technology is helping to streamline citizenship registration with implication for financial inclusion, public service delivery and the participation of citizens in the full life of our democracy. ”We have also used technology to streamline revenue collection, financial processes with implication for transparency and accountability in governance, we have used technology and data to plan and review policy interventions with implication for focused investment and better outcomes,” H.E Bio said.

“We are inspired as a nation adding that we are an innovative nation and we will continue embracing technology because of the boundless opportunities it offers to us as a growing nation. ”Our progressive vision for the possibilities offered by drone technology predicts also align very well with Africa Union’s high level panel on emerging technologies 2018 which calls for member countries to use drones to boost Africa’s development and accelerate transformation of the continent. We are particularly energized about the possibilities of drone technology to serve primarily our human capital development priorities in free quality education, food security, and quality healthcare and other ancillary development benefits,” he said.

The National Drone Corridor among others will provide multiple and ground breaking opportunities in for instance agriculture and food security, drone technology can provide a bird’s eye view of a farmer’s crop, spray fertilizers and insecticides more efficiently and also help the general crop monitoring and management.

This will increase average acreage yields. Cash crop plantations can be more effectively monitored on air by drones,  can help to monitor green cover loss and adequately anticipate general problems related to primate resilience and biodiversity loss as a result of human activities, extend the possibilities for teaching new curricula and new disciplines that are critical for national development from waste management, urban planning to infrastructure management to eco-tourism, drones can facilitate rapid delivery of medical supplies for pregnant women and help stem maternal mortality, vaccines and lifesaving medicines such as snake bites serum or deal for medical emergencies or otherwise inaccessible areas where there may be an outbreak of communicable diseases, help facilitate the transport of drugs. Help with area surfing, mapping in order to predict and act on possible developments among others.