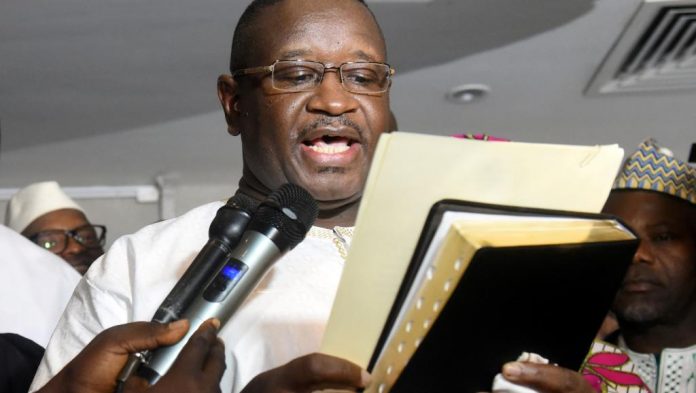 Allegations of corruption in the auctioning of unclaimed goods at the Port, booking by reluctant commercial drivers at points where they are supposed to be checked by traffic police and wardens, continued exploitation by schools and teachers in various forms in spite of the FQE,  poor service delivery by certain MDAs, allegations of demanding of commission from contractors by Finance Ministry officials before contract payment is approved and made; these and many allegations of lack of transparency and accountability dog President Bio’s New Direction Government.

Accountability  and  transparency  are  major  pillars  in  the  architecture  of  governance if the goal of poverty reduction through effective and efficient service delivery by MDAs and economic growth and diversification are to be achieved by the Government and its people in the shortest possible time.

in developing a community or country good  governance is the foundation of all other State activities which  essentially  boils down to a strong mix  of  transparent  and  accountable  institutions;  ethical work conduct, skills and competence and above all willingness by State actors particularly those entrusted with finances, resources and service delivery responsibilities to do the right thing.  Some MDAs, the people observe, are still stuck in the old way of doing things – no bribe, no hand shake, no service.

For the New Direction Government to succeed where previous administrations failed in delivering on their promises to the people, transparency and governance should run through the country’s entire political, economic and social structures.

Any weakening in public  accountability  and  transparency;  respect  for  and  strengthening  of  the  rule  of  law  and  anti-corruption   measures;   democratization,   decentralization   and   local   government   reform;   increased  civil  society  participation  in  development,  respect  for  human  rights  and  protection of the  environment amount to failure by whatever political party is in power.

Transparency refers to openness in Government policies  and  decisions which requires making available required information to the populace in order to minimize the scope for misuse of resources and enhance public capacity to hold Government and its officials to account.

Crucially, budget transparency is paramount because it is through it that management of national resources is implemented. Therefore, absence  of  transparency  in  budgeting  processes  can  engender  corruption,  inefficiency  and  inequity,  and compromise the provision of public services and the development effort. Particular focus is advised on public procurement. The use of open tender processes, publication of relevant information regarding award of contracts, easily accessible complaints procedures when foul play  is  suspected,  are  among  the  crucial  considerations  for  ensuring  good  governance  in  public financial management.

Similar approaches should be adopted in the management of revenues accruing from natural resources  such  as  oil  and  other  mineral  wealth,  forestry  and  fisheries  resources.  The  contracts  signed  with  foreign  partners  for  the  exploitation  of  these  resources,  the  revenues  accruing  there  from  and  the  uses  to  which  they  are  put  should  be  readily  accessible  to  the  populace. Absence of transparency in these matters create breeding houses for conclusion of  arrangements  which  may  not  be  of  general  national  benefit,  encourage  misappropriation  and exploitation of national resources in the interest of an elite minority, with a potential in the long run of threatening national cohesiveness and precipitating instability.

The case for transparency and good budgetary management assumes further significance in the evolving advocacy for channeling aid through the domestic budget. The provision of aid in  the  form  of  general  budgetary  support  confers  greater  independence  in  the  use  of  resources  on  recipient  countries,  stronger  national  ownership  of  development  policies  and  programmes, and lower costs than those associated with multiple aid delivery modalities. For this  intention  to  be  achieved  on  a  wide  basis  and  the  proffered  benefits  realised,  donor  governments  and  institutions  must  have  confidence  in  mechanisms  in  place  in  recipient  countries for the management of the budget.

Worries about corruption and mismanagement are  antithetical  to  this  objective;  hence  the  need  for  strengthened  budgetary  procedures,  improved governance and transparency.  There is a strong perception in the donor community that international assistance is required to help strengthen the public financial management systems and processes in aid receiving countries, including oversight by parliament, audit boards and  civil  society.  Apart  from  the  technical dimensions of the intervention, it is considered pertinent that, as may be relevant, the   recipient   countries   should   subscribe   and   adhere   to,   internationally   sanctioned   arrangements,  such  as  the  Extractive  Industries  Transparency  Initiative  (EITI),  to  ensure  appropriate  disclosure  of  revenue  accruals  and  maximization  of  inflows  from  national  resources.  Accountability   is   the   natural   concomitant   of   transparency.

Indeed,   the   purpose   of   transparency is essentially the facilitation of accountability. In general, accountability refers to the  obligation  of  those  in  authority  to  account  to  those  on  whose  behalf  they  exercise  such  authority,  for  the  discharge  of  the  responsibilities  entrusted  to  them.  We  can  distinguish  between  financial,  political  and  administrative  elements  of  accountability.  The  exercise  of  accountability  requires  a  system  of  laws,  regulations  and  codes  of  conduct.

In addition, mechanisms should be established for monitoring compliance and deviations, and institution of corrective measures.  Financial  accountability,  which  tends  to  be  the  main  focus  in  this  context,  pays  special  attention  to  budgetary  processes.  It  is  deemed  a  necessary  condition  for  good  governance;  prudent management of public resources; reduced corruption; better delivery of services; and a  support  to  efforts  at  poverty  alleviation.  Strengthening  financial  accountability  requires  reforms  almost  across  the  board,  touching  on  the  parliamentary,  judicial  and  administrative  structures  and  modalities  of  government,  and  could  thus  entail  a  far-reaching  revamping  of  governance systems.