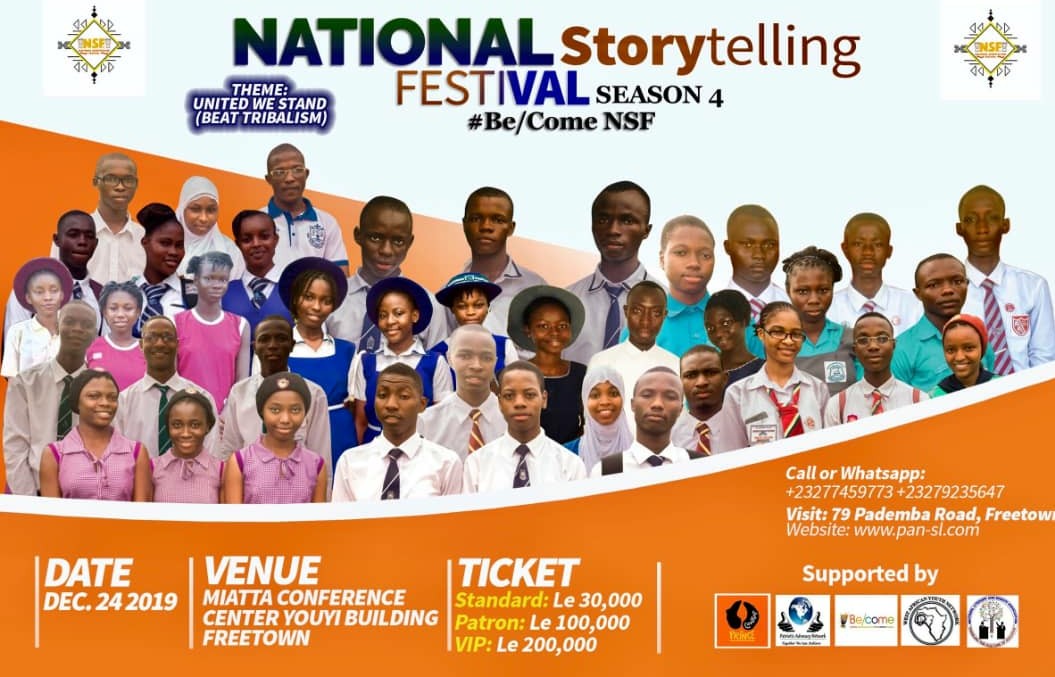 To celebrate the country’s rich culture and tradition heritage, the Patriotic Advocacy Network-Sierra Leone (PAN-SL) in partnership with Usifu Jalloh commonly known as Cowfoot Prince is set to host its annual National Storytelling Festival on the theme: United We Stand- Beat Tribalism. The programme is schedule to take place on Tuesday 24th December, 2019 at the Miatta Conference Centre.

Speaking to this medium in an interview Executive Director of Patriotic Advocacy Network (PAN-SL) Ansumana Keita disclosed that the National Storytelling Festival is an annual event that celebrates the traditional and contemporary oral heritage of Sierra Leone and promote both literary and oral culture together with traditional songs that are under threat of extinction.

He added that NSF inspires people in all facets of society including pupils, students, educators, elderly people and Sierra Leoneans in the diaspora; thus creating the platform for people to share their stories in a well-structured, organized, educative and entertaining manner.

He said that for the past three years, NSF has been able to attract the attention of both national and international audience, noting that last year, the grand festival was staged at the Miatta Conference Hall with over 500 people in attendance.

He disclosed further how the 2019 National Storytelling Festival will involve the engagement and participation of school going pupils, university students and youth groups across Sierra Leone on the theme “United We Stand-Beat Tribalism” which, according to him, was deliberately selected in order to promote peace, unity and national cohesion in the country. He also revealed that the students will take part in competing and entertaining their audiences, adding that they will be telling stories, poems, doing cultural and musical performances stating that  special prizes including Certificates, Medals, Trophies and Cash Prizes will be awarded to the winners.

Keita maintained that the NSF is divided into categories which are stories with traditional songs and music and instruments, stories in riddles, stories in native languages and stories in English etc.

Underscoring the objectives of staging the event, he pointed out creating a platform where the young and youth can showcase their talents, to bring young people together to tell the beautiful and educative stories of our Land and to engage school pupils to know more about our heritage of our Motherland, adding that the goal of the event is to revamp and celebrate the rich oral, literary culture and heritage of our beloved country.

He said prior to the event they will be touring and facilitating trainings in various schools, universities and communities which ,as he maintains, started in November and then organize a two week event in December- one week for school going pupils and university students and another one week for community engagements.

He disclosed that the NSF is scheduled to take place on Tuesday 24th December, 2019 at 2:00pm at the Miatta Conference Centre.