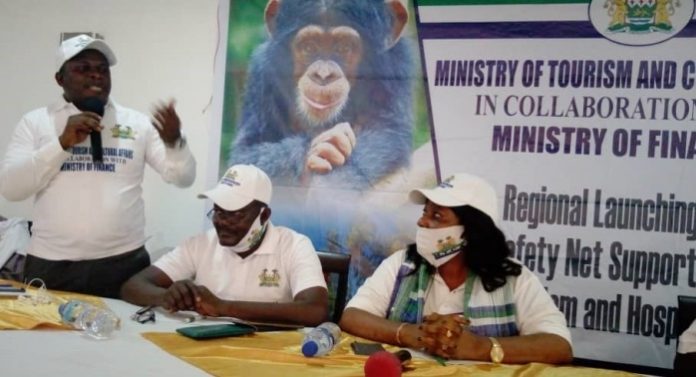 Following the successful launch of the Tourism Safety Net Support scheme in the East and Southern regions, the Hon. Minister of Tourism and Cultural Affairs Dr. Memunatu B. Pratt and team safely arrived in Makeni – the Northern Region District Headquarter town, on the 23rd August 2020, to continue the launching with the cash disbursement to employees in the Tourism and Hospitality Sector at the Wusum Hotel Conference Hall.

Deputy Minister of Tourism and Cultural Affairs, William I. K. Robinson  noted that the safety net support scheme is to support employees in respect of easing the Covid-19 impact on the sector.

Paramount Chief Bai Shebora Kasangna II welcomed the program in his region describing it as a laudable and timely initiative which will not only benefit the beneficiaries but also their family members and other relatives.

A representative from the Makeni City Council on behalf of Her Worshipful the Mayor conveyed a welcome message to the Hon. Minister and her Team for the development strides made so far adding that the people of the Municipality are ready to work with her Ministry at all times.

Deputy A.I.G. North Mr. Lansana Momorie Koroma expressed appreciation for the Safety Net Support and assured all of a very good safety and security measures that is in place for the region and ended by thanking the Government for such a venture in easing the impact of the present pandemic on the lives of employees in the Tourism and Hospitality Sector.

The representative of the Hotel and Tourism Association (HTA) Northern Region, Annie Bangura extended appreciation to Government citing that this has never happened in the history of Sierra Leone and appealed for consideration on behalf of employees whose Management failed to submit employees list as requested by this Ministry.

The Director of Tourism, Mr. Mohamed Jalloh stated that Sierra Leone is naturally blessed in terms of tourism potentials adding that there is huge economic impact within the sector, that is why the Government has identified it as a key sector in diversifying the country’s economy.

The Resident Minister North, Abu Abu  Koroma  embraced the gesture and thanked the President  for such an initiative and also  noted the essence of involving Local Authorities as custodians of natural assets in the Tourism Sector. He admonished all that the support is for all regions.

The keynote address from the Hon. Minister of Tourism and Cultural Affairs, Dr. Memunatu B. Pratt climaxed the event by describing the day as a divine day and that is why her Team decided to pay beneficiaries even on Sunday. She asked all to sing the National Pledge to show nationalism and emphasizing that this is not the time for politics but time for national development and service delivery.

The Ministry of Tourism then proceeded with the Social Safety Cash Transfer (SSNCT) to Port Loko District on the 24th August 2020.

The Director of Tourism, Mohamed Jalloh, gave a detailed explanation about the essence of Tourism to the people of North-West. He dilated on how Tourism and Hospitality can  change the face of the country and Port Loko in particular further admonishing them to place relevance on the things that will attract investment and increased tourism perspectives within the region at all times.

The Hon. Minister of Tourism in her keynote address stated that peace for development is a core, that everyone must be committed to adding how posterity will judge us based on our actions towards our beloved Sierra Leone.

She said they were in the district to bail out workers within the Tourism and Hospitality sectors which were badly hit by the outbreak of the coronavirus.

The Minister informed the beneficiaries that what they are doing was made possible by the determination of President Bio and his Government who thought it fit that workers in those sectors are financial bailed out because those sectors are not currently properly functioning as a result of COVID-19.

She concluded by calling on all tourism players and actors to take registration and payment of taxes very serious stating that the monies they will be paying them are partly generated from those avenues.

Payment of monies to the amount of One Million Eight Hundred Leones (Le1,800,000) to each of the eligible workers climaxed the occasion.