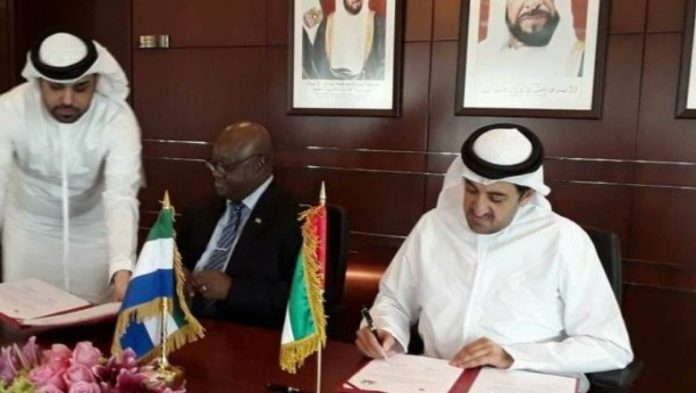 A delegation of potential investors from the United Arab Emirates (UAE) is in Sierra Leone as part of a fact finding mission.
The delegation headed by the Assistant Minister of Foreign Affairs and International Cooperation for International Development Affairs, Sultan Al Shamsi, has been holding talks with government officials, including President Julius Maada Bio. A statement from the Presidency in Freetown said the visit was a follow-up to President Bio’s visit to the Gulf State last month.
In March President Bio led a delegation of Government Ministers on a state visit and held talks with officials, including the Emir, Khalifa bin Zayed Al Nahyan. A State House release quoted President Bio as saying that his meeting with the Emir resulted to the visit.
“When we last visited the UAE in search of investment opportunities, Khalifa Bin Zayed Al Nahyan, President of the UAE assured me that he would send a delegation to Sierra Leone for this said purpose. I didn’t expect it to happen so soon,” Bio said, noting that Sierra Leone was looking for credible investors who would explore the many opportunities of the country through their various interests and assured of their protection.
Chief Minister Professor David Francis also told the delegation that Sierra Leone is an emerging destination of choice for Africa and other developed countries, noting that under the leadership of President Bio the Government would ensure that all investors and their investments were protected.
According to Al Shamsi, key areas of interest for his delegation were agriculture, education, energy, health, women’s empowerment through job creation and the empowerment of small and medium-sized enterprises.
“It is very promising and important coming here to Sierra Leone to partner with the Government and find ways the two countries can make investment better. One thing that is important and fundamental here is the commitment by the Government to protect investors and their
investments,” he said.