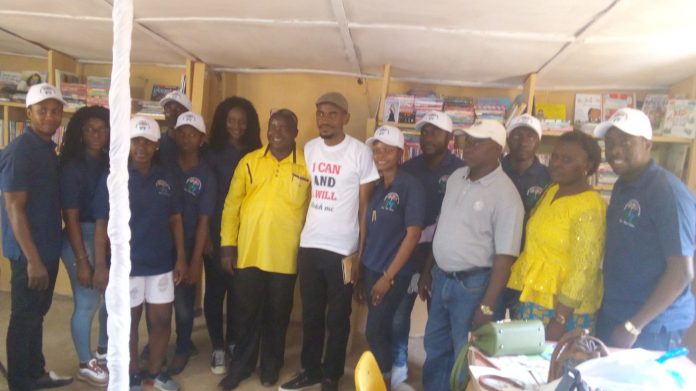 On Saturday 13th April 2019, Children Assurance Program, an advocacy organization that was established in order to promote education in the Jui community opened a community library and resource centre.
Speaking during the launching ceremony, the Executive Director of CHILDREN ASSURANCE PROGRAM SIERRA LEONE (CAP-SL), Baimba O Sheriff, disclosed that the organization was born out of the vision to promote education within the community.
The launching of the library in the Jui community is a stepping stone in achieving this vision, he said. He further disclosed that the library is not only going to benefit the Jui community but also Hastings, Kossoh town and Grafton communities and will promote education. Sheriff added that their focus is to complement the free quality education of the President and government of Sierra Leone. He disclosed that CAP-SL is self-sponsored with help from well-meaning people both within and outside the country.
He concluded by saying that the facilities will promote the skills and expertise of young people and ensures that the library will enhance their reading ability.
Abubakarr, a representative of CAP-SL in the diaspora, also spoke on the activities of CAP-SL in the diaspora. He said that the organization is not only going to stop at the Jui community, but will help other communities with such facilities. According to him, the library is not only the project they are planning to implement, they are also looking forward to work on other projects like providing Milla Water Tanks etc.
Mohamed Dukuray, Supervisor of schools, Western Area Rural District in the Ministry of Basic and Senior Secondary Education (MBSSE) thanked CAP-SL for the great gesture, adding that material things have clouded our vision effectively taking away the country’s glory as ‘the Athens of West Africa’. He also spoke about sustainability, which he said is the very key to development. He encouraged CAP-SL to ensure that the project is sustainable and called on parents present to ensure that they encourage their kids to make good use of the facilities.
He said that as a Ministry they will ensure that they support them with library books, especially when supplying library books to other libraries within the country. He said that most kids are engaged in negative things, because there is no platform for them where they can engage themselves on any meaningful endeavour, but with this library in the community, a change for the better is expected.
Councillor Santigie Sesay of Ward 382 and chairman for Education Committee Western Area Rural District Council, who represented the Council, said they are committed to complement the efforts and dream of other people including CAP-SL because they believe in the empowerment of young people through education.
Elaborating on the importance of the library in the Jui community, he said that as a council they are devoted to the realization of the dream of the President. As a Council with little resources, he added, they have renovated a school at the Adonkia community.
He concluded by emphasising on the importance of library and called on the community to make good use of the facilities and thanked the organization for the gesture.
Mr. Abdul Bah, National President of Sella Development for Education and Progress (SEDEP) also thanked CAP-SL for the gesture and called on the community to see it as their property. He also called on humanitarian organisations to support the project. In that respect; he donated one hundred dollars. Mr. Alimu Jalloh also donated 10 bags of cement to pave the frontage of the library and called on others to give their support towards the sustainability of the library.