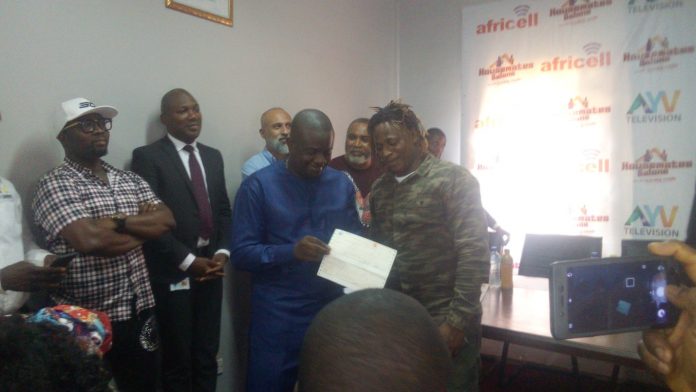 The Africa Young Voices (AYV) Media Empire in close collaboration with Africell, the leading GSM operator in the country has on Tuesday 16th April 2019 presented cheques of One Hundred Million Leones to Kenchine Palmar winner of the 2019 Salone Housemate TV Reality show, Fifty Million Leones to Monica who won the second position. The two institutions also signed a Memorandum of Understanding with The Media Evangelism Drama Ministry from Nigeria.
Speaking during the event, Dr. Duramani Ezikel Lakoh Managing Director AYV Media Empire congratulated the 22 housemates. “It was a very long journey that started with over 1,500 young people and now here you are. Our objective was not only to make money, but we also created the platform for young people to excel and expand. “We have signed various MOUs and implemented them not to make money but rather want to build the reputation of our institution and bring up a social enterprise in Sierra Leone to empower young people,” he further disclosed.
He stated that AYV is a hub of young talented people underscoring that they have been airing different live programs live including one of which was Housemates Salone.
“Converging here today to sign another MOU with MEDM should not come as a big surprise because it is the dream and aspiration of the CEO Ambassador Antony Junior Navo to continue with the empowerment,”
In his brief address, Ambassador Antony Junior Navo welcomed the stars from Nigeria and Ghana and congratulated the Management of AYV and Africell as well as Sierra Leoneans for the just concluded Housemates Salone Show. “When I started the AYV I told Sierra Leoneans that I will use my little resource to help develop this country in my own way especially in the direction of empowering the youth. I took a loan 1.2 Million from GT Bank and today I am proud to say AYV has employed over 500 staff nationwide,” he stated furthering how they have signed over 200 MOUs and the latest one is with the BBC.
According to him the MOU will enable the Media Evangelism Drama Ministry from Nigeria benefit from their facilities and Infrastructure as well as airing of t 52 drama series assuring them that they will get the best from them. Ambassador Navo however called on all to put their differences aside and work in the best interest of the nation so it can become the Singapore of Africa.
Making his statement Africell’s Managing Director, Shady Jarjudia, said the Housemate s Salone 2019 Reality TV show was project for Africell and AYV disclosing that it was very challenging to meet with the demand of the public, especially in the technical area, making sure that becomes interesting. He informed how they have now started to work on the next coming event for move improvement.
He stated that Africell is committed to give back to this nation and we are ready to work with everyone.
He thanked Sierra Leoneans for the confidence reposed in the two institutions.
Pastor John, CEO Media Evangelism Drama Production said they are highly motivated to work with AYV and the people of this country. He disclosed that the 52 drama series concept will be around Rape, sexual violence, and violence against women and youth empowerment.
“I am a reformer of the movie industry. I have done that in Gabon and Togo and I hope to do the same here,” he said with pride.
Zack Orji said he was very much happy to be part of the historic event Housemates Salone which according to him has helped change the narrative of the entertainment industry in Sierra Leone. The 52 drama series concept will be around Rape, sexual violence, and violence against women and youth empowerment.
Zack however encouraged the former housemates to make use of the opportunity offered to them by AYV and Africell.
Emmanuel Ayalogu is a Film Producer , Director and Marketer in both Nigeria and Ghana. He congratulated AYV and Africell for being part of development in the country hailing what AYV is doing for the rebranding of the country saying it is a land of courageous and brave people even though it went through War, Ebola, Mudslide but you still you are still strong.
He however encouraged the Media Evangelism Drama Production to include some of the Housemates to be part of the project.