In an unprecedented move, on 9 February 2020 Sierra Leone Ambassador to the United Arab Emirates Rashid Sesay joined leaders of the UAE to receive armed forces who had been on deployment in Yemen.

The UAE leaders gathered in Zayed Military City for a presentation, cataloguing the country’s achievements during its five-year involvement in the Arab Coalition’s efforts to restore the legitimate and internationally recognized Government in Yemen.

Vice President and Ruler of Dubai, Sheikh Mohammed bin Rashid, described the gallant servicemen as faithful falcons, who sacrificed and raised their heads with pride adding that they were proud of them, their family and work.

Crown Prince of Abu Dhabi and Deputy Supreme Commander of the Armed Forces, Sheikh Mohamed bin Zayed, assured that the UAE would remain a bridge to peace and stability, supporting the region’s progress of hope for a better life and a better tomorrow.

In his reaction, Ambassador Sesay said: “On behalf of the Government of Sierra Leone, I congratulate the UAE for being a beacon of global peace and security.” 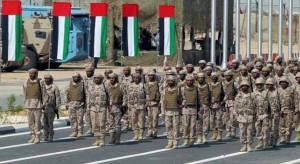