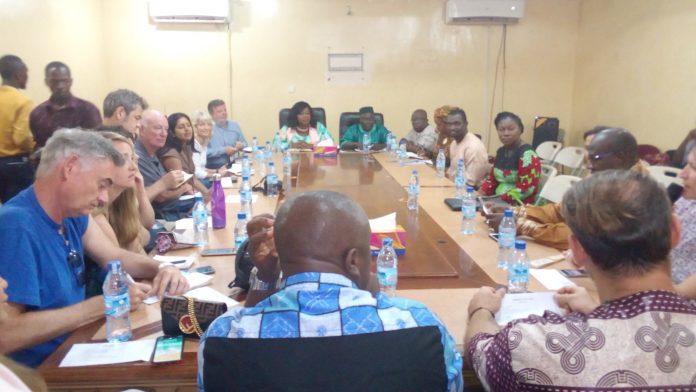 8 UK Tourist Journalists, who were on a 9 day fact finding mission on the potential of Sierra Leone’s Tourism, on 12th April 2019, briefed the Minister of Tourism and Cultural Affairs on their findings during their stay in the country. The team was led by Tim Henshall, Chief Executive/UK representative of Kamageo Africa Destination marketing. Present at the meeting were the Acting General Manager of the National Tourist Board, Madam Fatmata Abe-Osagie, staffs of the Tourist Board and the Ministry of Tourism, Minister of Tourism and Cultural Affairs, Dr. Memunatu Pratt and members of the Sierra Leone press.
Mrs. Fatmata Abe-Osagie, Ag. General Manager, National Tourist Board, Sierra Leone, said that the presence of the UK team of journalists in the country is as a result of the ministry’s participation in the World Travel Mat. Explaining the purpose of the meeting, she said that after spending 9 days in the country, viewing the country’s potential, the team will disclose their findings and recommendations for the development of the industry, with a view to make it attractive in the international tourist market.
Making known their findings on behalf of the group, Tim Henshall, Chief Executive/UK Representative of Kamageo Africa Destination Marketing, said Sierra Leone is a country that is full of riches, but as a nation, it has not been utilizing them, stressing that the tourism sector has the potential to meet the world market. Whilst recognizing the problems faced in the sector, he maintained that to meet the standards of the World Tourist Market, there is the need for improvement of the overall Tourist infrastructure, quality of services in the sector and an improvement of the provincial option.
He said this visit has great impact in the country’s tourism sector, as they are the fore runners of people who want to come to Sierra Leone, but who depend on what the team shows them about the country. He expressed their willingness to sell Sierra Leone in the International Tourist Market.
Addressing her audience, Dr. Memunatu Pratt, Minister of Tourism and Cultural Affairs, expressed appreciation to the UK team for the tremendous support given to the tourism sector. She further spoke of the political commitment of the government, stressing that in the New Direction Manifesto, tourism is rated as one of the top priorities alongside agriculture and fisheries, adding that the President is passionate about tourism and wants to see tourism revamp the economy of Sierra Leone. She further explained that as a ministry, they are working in continuous consultations with the rest of the MDAs as to what is happening in the tourism sector.
“Over the years the focus of Sierra Leone has been on mining of diamonds and gold. Yes we accept that we are having revenue from those sectors, but we have found out that the tourism sector should have been one of the areas that could have responded to things like youth unemployment, skills development, private sector development, trade and investment and developing our basic culture of patriotism and national cohesion. These are the things we have realized”. She added.
On the issue of the improvement of the basic facilities around tourist attraction sites mentioned by the UK press, the minister said that as a ministry, they are working restlessly to ensure that all the findings of the UK team are looked into and possible ways of addressing them arrived at. She also added that they are going to work with the private sector in achieving their goal.
To rebrand the country’s tourism sector, Madam Memunatu Pratt told the visiting team that plans are well on the way to implement Eco-Tourism policy, establish Eco-Villages, Eco-Lodge and Green Tourism.
She assured the UK press that their findings will be carefully looked at and will work together with them to make the country’s tourism fit for the World Tourist Market.