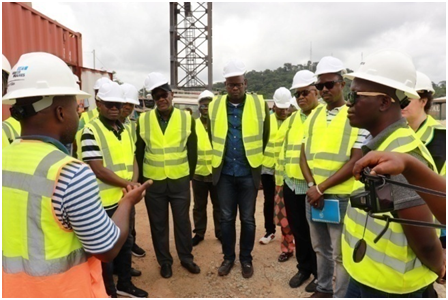 The government of Sierra Leone through the Ministry of Health and Sanitation and the World Bank in 2019 signed an agreement with the United Nations Office for Project Services (UNOPS) to design and construct one facility at Jojoima, Kailahun District which is one of the most vulnerable districts with high infant and maternal mortality rate in Sierra Leone.

The Construction of a Basic Emergency Obstetric and New-born Care (BEmONC) facility in Jojoima, in the Kailahun district, is a two years project which commenced in June 2019 and was to be completed by June 2021, with the objectives of strengthening the health system in Sierra Leone and bring about the necessary changes in the country’s health system to deliver better services related to reproductive, maternal, and child health with the targeted beneficiaries of under-fives, pregnant and lactating women.

But unfortunately, this project has suffered a considerable delay that has warranted several extensions.

This is the reason that a joint high-level mission comprising of the Minister of Health and Sanitation, Dr. Austin Demby, the World Bank Country Manager, Abdu Muwonge, Financial Secretary Sahr Jusu, and other officials of both the Ministries of Finance and Health left Freetown on Friday 29th July 2020 to conduct an inspection and supervision of the progress of the work the contractors are doing.

Welcoming the delegation to Jojoima town, the Paramount Chief of Malema Chiefdom, Chiefdom PC Lamin Gavao, thanked the team for the visit to his chiefdom and expressed appreciation on behalf of his people for the construction of the Basic Emergency Obstetric and New-born Care (BEmONC) facility in the Malema Chiefdom.

He continued that the facility will provide medical services to over ten communities and surrounding villages.

He however expressed concerns over the delay in the construction process, citing instances of public disorder between contractors and their employees and asking for quarters for Doctors and access roads leading to the hospital.

After a brief introduction and safety guidelines at the hospital site, the Main Contractor Professional Engineering Services, represented by their Construction Manager, Dephou Olu Johnson, proceeded with the tour of the facility.

During which the Minister of Health and Sanitation Dr Austin Demby expressed dissatisfaction over the delay in the construction work and asked that the contractors meet the 60 days deadline to hand over the building.

World Bank Country Manager, Abdu Muwonge stated that he does not want the project team to ask for another extension thereby urging the contractors to do whatever they can do to meet the end of September deadline.

He stressed that the responsibility to deliver the work is on UNOPS and not the contractors because according to him, the World Bank and the Government of Sierra Leone are in agreement with UNOPS and not the Contractor.

In her response, Project Manager of UNOPS, Atinoke Iakonle, assured the delegation that they and their contractor have done most of the work and that the remaining will be completed within the 60 days with the level of both workforce and material mobilization they have done.

The delegation also stopped at Nixon Memorial hospital where they inspect the facilities of the hospital and at Giehun Luawa, in the Luawa chiefdom.