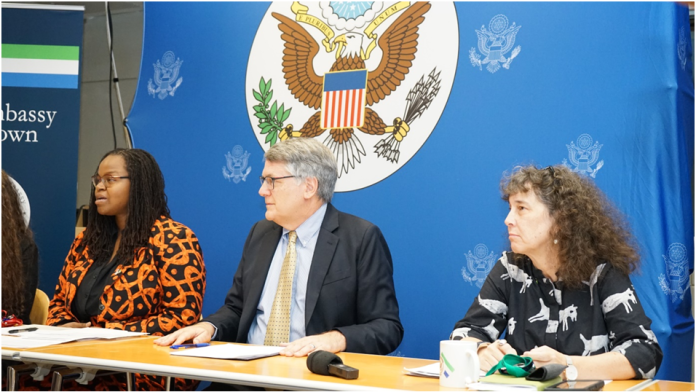 During a well-attended Press Roundtable held on Wednesday 31st August 2022 at the United States of America Embassy on Southbridge – Hill Station in Freetown, the Ambassador of the United States to Sierra Leone, David Reimer, briefed Pressmen in attendance on the Embassy’s recent activities.

The Ambassador commenced by pointing out that the role of a free and an independent Press is critical to a democracy in which the Government is accountable to the people maintaining how it is one of the values that the United States and Sierra Leone share.

“As we look to the future, I again urge a commitment from all sides to de-escalate tensions. Dialogue, respect for human rights, and the rule of law should be guiding principles for everyone as we work to resolve our differences peacefully and productively. We call for all to refrain from violence, and urge the country’s leaders – in both words and action to bridge divides and work to unify Sierra Leoneans following the violence,” he enjoined.

The US Ambassador informed pressmen about the return of Peace Corps Volunteers to Sierra Leone which he described as great news disclosing how they are all very happy about that.

He disclosed that after completing their 10-week pre-service training, the 17 new volunteers will be officially sworn in on Friday, September 9 at the Peace Corps Training Facility in Kambia and that after their swearing-in, they will go to communities across Sierra Leone to work together with local partners in the health and education sectors.

He furthered that five of the volunteers will serve alongside community health workers focusing on child and maternal health adding how they will be working with women and caregivers to promote healthy pregnancies, safe deliveries, and healthy children.

Ambassador David Reimer also pointed out that they will be working with community health workers to improve their skills to deliver health education, and working with the youth in order to increase their knowledge as well as improve their health and well-being.

He disclosed that progress has been made on the Health Grid Sierra Leone Project that, he said, is going to literally turn on the lights in rural health communities across Sierra Leone

The Ambassador stated that, “access to stable, reliable electricity is key for health care providers to treat people. Electricity should not be a privilege just for health care clinics in major cities. That is why I am proud to highlight that this year; we expect to finish installation on the first of what will be 31 clean energy facilities for rural health clinics. This is part of the HealthGrid project, a project designed to improve access to electricity in health facilities.”

He informed pressmen that the HealthGrid is as a result of a collaboration among the U.S. Government through USAID, the non-profit RESOLVE and World Vision organizations and a private sector partner, Orange Sierra Leone, together with the Ministry of Health and Sanitation.

“The project will total almost $2 million, of which around 40% is funded through USAID. The project will also include a sustainability fund of about $100,000, which will enable long-term maintenance and oversight of the facilities. HealthGrid will install sustainable solar energy systems for 31 remote, off-grid, healthcare facilities in Sierra Leone,” the US Ambassador revealed.

He said the project will also install and maintain internet connectivity equipment at each healthcare facility, as well as water and sanitation equipment at selected sites, stating that thus far, HealthGrid, in collaboration with the Ministry of Health, has selected 16 facilities throughout Sierra Leone and they are expecting the first installation to be completed by the end of the year.

The Ambassador concluded by informing the pressmen of the training for Public Health Officials and Clinical Practitioners.

He continued by intimating that he is pleased to announce that the United State’s partnership with Sierra Leone to increase the training of public health officials and clinical practitioners is going strong.

“On Monday, we celebrated the graduation of 35 students by the U.S. Center for Disease Control (CDC) in Field Epidemiology. I was there in person and it was a wonderful celebratory event,” he stated.

He disclosed that the CDC Field Epidemiology Training Program was started in 1980 to train what he termed, “disease detectives” ,all over the world, adding that the impact that trainees of the program  are having on health in Sierra Leone speaks for itself as graduates of the program lead investigations on outbreaks of diseases like Lassa fever, Monkey pox, Ebola, COVID-19, and Polio furthering that additionally, previous trainees of the program are also working with their counterparts to investigate the tragic food poisoning incident in Kenema some weeks ago.

“Earlier this year, I was pleased to attend a training session for health care providers to more effectively diagnose and treat HIV/AIDS. This is an area that both the U.S. President’s Emergency Plan for AIDS Relief and the U.S. Department of Defense have been instrumental in addressing,” he concluded.

Closing the press roundtable was a question and answer session during which Pressmen present had the opportunity to ask pertinent questions to the Ambassador.