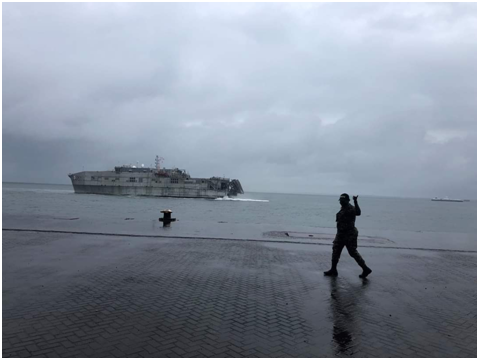 After twenty-five years since the US Naval vessel visited the Freetown Port, the Queen Elizabeth II Quay it once more berthed at the Port on the 24th July, 2022.

The Vessel, according to officials onboard, is currently on a continental tour to Ports in the sub-region that have made tremendous gains in promoting International Port Security and Safety.

In a citation read by the visiting team onboard the Vessel, the Sierra Leone Ports Authority was commended, “…to have made considerable reforms in maritime security and safety, which has attracted both local and international accolades”. The reforms, among others, include : The Authority’s very recent pass mark in the International Ship and Port Facility (ISPS) code audit, installation of CCTV cameras with 24 hours surveillance, increased security personnel by training over forty security officers on advanced security at the Sierra Leone Police Academy in Hastings.

Speaking on the importance of the said visit, the General Manager of the Sierra Leone Ports Authority, Dr. Abdulai Fofana, intimated that the US Naval visit has restored the past glory of the Freetown Port as such visit confirms and enhances the safety and security integrity of the Port.

It is also reported that the Port Management has held series of consultative meetings with stakeholders including the National Revenue Authority (NRA), the Sierra Leone Police and the Republic of Sierra Leone Armed Forces (RSLAF) Naval Wing.