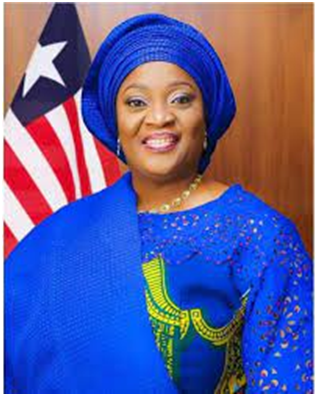 Vice President Jewel Howard-Taylor of the Republic of Liberia is very keen on using the Biometric System of registration to be used in the electioneering period which will ultimately culminate in the . General Elections, when the President and other political officials will be elected.

In an exclusive interview with the Vice President, she intimated that as the elections are not far away she prefers the use of the Biometric registration voting saying it is the most accurate one, as thumb prints or facial recognition cannot be duplicated adding that paper work for elections that can be duplicated with a huge possibility for something to go wrong.

She maintained further that Biometric technology is very useful for ID verification in other countries including Government organizations, banks and financial institutions, and high security areas maintaining that it is capable of recognizing people swiftly, consistently, and reliably.

“ Indeed one of the main advantages associated with biometric technology is high individual identification accuracy,” she reiterated adding that biometrics relies on the use unique physical traits, such as a fingerprint, an iris pattern, or facial characteristics rendering biometric technology a very accurate technique of authenticating end users. Superior accuracy is why a lot of companies use biometrics for their security purposes.

According to her, since biometric characteristics cannot be conjectured or stolen, biometric systems present a superior level of security than usual means of authentication.

Vice Jewel Howard-Taylor, disclosed that she will be running again with President Weah as his running mate in the 2023 elections furthering how they have done what is humanly possible considering the two years of COVID.

According to her, like any other country Liberia has its own challenges adding that they have focused on the gains they have made, and how they would continue to make more gains as they go into the 2023 elections.

She affirmed that President Weah is the most popular President within the last fifteen (15) years also affirming that all of the young people still have hope in his ability, and how the young people are the majority in their population, and they are trying their best to cater for some of the needs that they have.

“No Government is free of challenges or criticisms, but I think President Weah is focus on the job ‘I can’, building roads, making sure our health system are improved, making sure our educational system are also improved to ensure better learning options for our children. And I think that what he is interested in doing,” Vice President Howard-Taylor said.

She revealed that the motto of their party is “Above all Else the People”  and how it is not about the  few but about the many maintaining that in 2023 they will do their best to ensure President Weah get elected for the second time.

She disclosed that she has been in politics for the past twenty(20) years, stating how all her work has been on women and children, providing scholarships from the Elementary school to the University, been a spokesperson for Gender Based Violence, mentoring young  and according to her it is her passion.

She pointed out that all the work she has done made her the Howard-Taylor that she is adding that she will continue to talk about issues that are important, making sure that she can input them in changing the dynamics.

The Vice President said as a Senator she worked on some laws to create a level playing field for women and children, and also laws on Sexual Gender Base Violence.

She said President Weah appointed her because of the good work she has been doing for women and children, and how they are also his heartbeat.

Howard-Taylor disclosed that they are working on a Corruption Court, continuing that the issue of corruption is prosecution, revealing   how they think they need a court to handle corruption court faster.

She maintained that the Government of the United States of America has come up with punishments for the members of Government who are indicted for corruption to be punished if found guilty.