On 8 February 2020 in Lungi, Port Loko district, Vice-President Mohamed Juldeh Jalloh  officiated the ground breaking ceremony of the construction of phases two (2) and three (3) of the ECOWAS logistics depot as well as handing over of the project sites to the contractor, SOGEFEL.

The phases 2 & 3 of the ECOWAS logistics base of which the ECOWAS Commission has allocated a budget of Eight Million, Four Hundred and Twelve Thousand, Nine Hundred and Seventy Nine USD ($8,412,979) will provide support to ECOWAS peace keeping operations to effectively combat violent extremism and terrorist activities in the West African sub-region.

In his opening remarks, as Chairman, the Minister of Planning and Economic Development, Dr. Francis Kai-Kai who used the opportunity to emphasize the importance of the event; stated that Sierra Leone had always welcomed ECOWAS with open arms and granting them freedom to explore the beauty of Sierra Leone and its warm people.

Minister Kai-Kai recalled, in 1997, the ECOWAS deployment of its military wing called (ECOMOG) to Sierra Leone to stop the RUF rebellion of which, at that time, Lungi provided the landing point and base for the troops during the country’s dark period. He said that , after 22 years, including 18 years of peace and state building, ECOWAS were again in Lungi to kick-start a process that will start another base, A LOGISTICS BASE for West Africa.

“Sierra Leone was rescued by ECOWAS through ECOMOG to attain peace and stability and that has been sustained up to today. This tranquillity has been recognized and rewarded with a huge responsibility of now hosting a depot that will contribute to the peace and stability of our sub-region”, Dr. Kai-Kai said.

Speaking on behalf of the PCMP Bai Shebora Sheba Gbereh III, the Chiefdom Speaker, Pa Komrabai said they were proud as a community to host the logistics depot facility for peace support operations. He congratulated and thanked all those whose dedication and efforts made the project a reality. He noted that the construction phase will further create more jobs for the people of Kaffu Bullom Chiefdom.

In her statement, the Vice-President of the ECOWAS Commission, Madam Finda Koroma noted that the logistics facility was timely and a very important project for the region’s peace support operations, in the wake of increased acts of terrorism and violent extremism that are being perpetuated in a number of the ECOWAS Member States with heavy and dire consequences on the civilian and military population.

She said that Sierra Leone and, in particular Lungi, were selected as the best location for the ECOWAS Peace Support Operations Facility due to the outstanding performance of Republic of Sierra Leone Armed Forces (RSLAF) across the world in peace keeping operations, in addition to the political and strategic considerations. Madam Finda Koroma thanked former Presidents, including President Julius Maada Bio for their unflinching support and continued advocacy at all levels of ECOWAS bodies for the operationalization of the ECOWAS Support Operations Logistics Facility.

In his keynote address, the Vice President of Sierra Leone, Dr. Mohamed Juldeh Jalloh expressed his gratitude to ECOWAS for fast tracking the depot, amidst the bureaucratic challenges involved in such projects; stating that he was pleased and honoured to be a part of the history making ceremony. He said the ground breaking ceremony for the construction of the logistics depot will send a significant message not only to the rest of Africa, but also to international partners that West Africa is ready to handle its security and build the infrastructure required to support peace operations.

Vice-President Juldeh Jalloh reiterated the commitment of the Government, under the esteemed leadership of President Julius Maada Bio, to continue in supporting the project.

“We are going to support this project in all facets— I have informed the commissioner about the importance of reactivating a national committee and get to work immediately. It is our responsibility to provide the adequate security and working environment so that this depot will be constructed within the 15 months period, as stipulated”, he said.

Vice President Juldeh Jalloh said in building the depot, ECOWAS has demonstrated that they have not only put together an infrastructure for peace support, but also building a sustainable bloc for sustainable development.

Other dignitaries in attendance included: Deputy Ministers of Foreign Affairs, Planning and Economic Development, Transport and Aviation, Works and Public Assets, DNSCOORD, Chairman of Presidential Infrastructure Initiatives, Resident Minister North-West among many others. 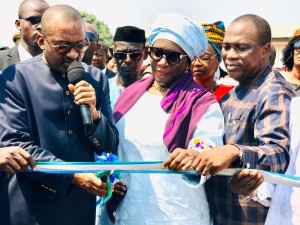