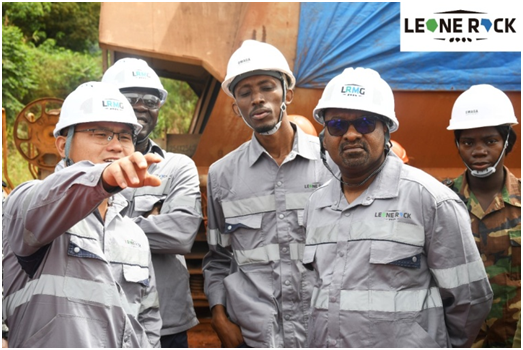 The Honourable Vice President, Dr Mohamed Juldeh Jalloh on Saturday 11th June 2022, while conducting a site tour at Kingho Mining Company’s mining vicinity in Ferengbeya , Tonkolili District,  stated that he was impressed with the investment made so far by the company, which operates the New Tonkolili Iron Ore Mines in that part of the country.

Based on a special invitation from the Kingho Mining Company Management the Vice President was taken through several sites of the company’s operations including the mining pit, the processing plant and the Train Load Out (TLO).

At the end of the conducted tour, the Vice President said he was impressed with the company’s operation so far adding that the investment made so far perfectly resonates with the vision and aspirations of the Government.

Explaining the progress made so far by Government to revamp the mining sector of the country since been voted in 2018, he said, “when we took over our major aim was to make the mining sector attractive.” He furthered how they realized that in order to make the sector attractive and boost investor’s confidence, they need to reform the existing mining regulations and laws to reflect the dynamics of modern societies.

He added that already Government proposed a bill to repeal the 2009 Mines and Minerals Act to make the country attractive for investment and to improve competition among companies.

“In the next couple of years, this country will be the hub for exemplary mining. Our role is to support companies to get there,” VP Juldeh assured.

On the part of the company, Salim Sillah, Director in the Office of the CEO, Leone Rock Metal Group said so far the company has invested over 23 million US Dollars in maintenance costs to restore the Tonkolili Iron Ore Mines to a properly mining environment. He said such was not easily achieved as the company took over in 2020 during the peak of the global COVID 19 pandemic.

Salim Sillah said the company’s vision is to transform the iron ore mining industry of Sierra Leone from ore exporters to iron producing through the installation of a smelting plant in the country. He said once that is achieved, the company will be able to boost several sectors in Sierra Leone including employment for Sierra Leoneans, tax and royalties to Government and development of mining communities.

Hence, Salim Sillah called on the Government for more support to the company and assured of the company’s absolute compliance to the mining regulations and laws of Sierra Leone.

The Director was accompanied on the site visit with the Vice President by Mines Compliance Manager of Leone Rock Metal Group, Ing Samuel Kamara.

In another development the Vice President, Dr Mohamed Juldeh Jalloh admonished indigenes of Bendugu Chiefdom in Tonkolili District to refrain from violent acts that have the proclivity of undermining the peace and security of the chiefdom. He advised all in the chiefdom, especially the youths to be law abiding, stressing that Government will not accept any form of violence from anyone irrespective of the person’s political belonging. “Government’s responsibility is to ensure all elections are peaceful,” he underscored.

The Vice President maintained that election is about campaigning through playing, singing, dancing.

“Bendugu people belong to one family, you should therefore not engage in fight because of politics or election. Rather play, laugh and eat together as a family”, he advised.