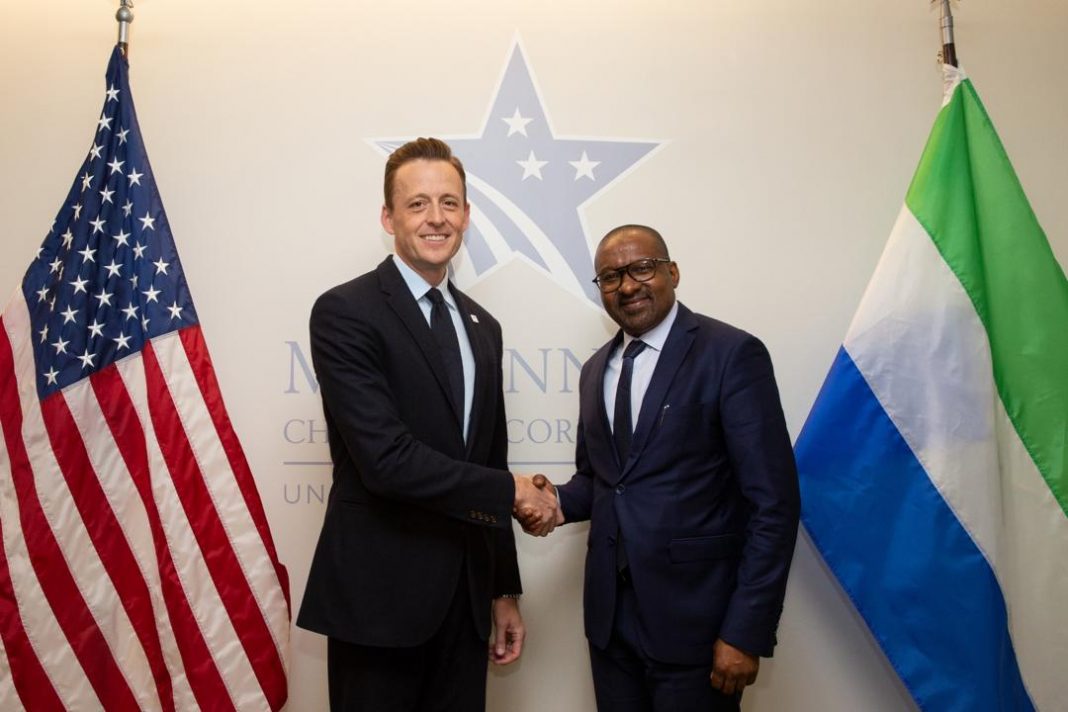 In the United States of America there is currently a high-powered delegation led by the Honorable Vice President, Dr. Juldeh Jalloh with the primary mission to discuss Compact readiness. The delegation on Monday 18th November 2019 met with officials of the Millennium Challenge Corporation (MCC).

The Sierra Leone Government was able to engage MCC on the remarkable strides that have been made on the MCC scorecard and the continued successful implementation of the $44.4 million Threshold Program.

In the bilateral meeting with the MCC CEO and Vice President for Policy and Evaluation, Dr. Juldeh Jalloh used the opportunity to reiterate Government’s commitment to deepening and strengthening the MCC partnership. He also conveyed His Excellency the President’s determination to continue to build the partnership by successfully completing the Threshold Program and ensuring that Sierra Leone is selected for a Compact.

The Sierra Leone delegation  which included the Ambassador to the USA, Minister of Finance, Bank Governor, Deputy Minister of Water Resources, the Managing Director (GVWC) and the CEO of the local accountable entity (MCCU) spoke at length of the reforms that are being implemented in line with the MCC scorecard interest areas.

These include ruling justly, investing in people and economic freedom. The delegation made several presentations and illustrated the improvements in the investment climate and the unwavering commitment to the rule of law and the fight against corruption.

The Vice President noted during the discussions that the scorecard is a reflection of the state of affairs on the ground, and while there are gains, Government is committed to improving its performance.

He highlighted the inter-ministerial coordination that has been boosted by the scorecard, and the embedding of the scorecard in the Medium-Term National Development Plan.  Within this context, the Sierra Leone team discussed how the prioritization of human capital development has had a significant impact on the scorecard especially in the areas of health and education.

The MCC CEO congratulated the Vice President on Sierra Leone’s performance on the FY 2020 scorecard. He also indicated the MCC’s desire to build a strong partnership with Sierra Leone for the long term.

The Minister of Finance and the Bank Governor of the Central Bank spoke briefly on the prevailing investment environment in the country.

The Vice President, who is in Washington DC for a week, will meet with other key US stakeholders to explore opportunities to enhance trade and deepen the US- Sierra Leone bilateral relationship.