In their quest to help the less privileged in the country, Sierra Leone’s best R&B Pop Star Artist who also doubles as the Chief Executive Officer of Slim Nation, Nelson Idrissa Kargbo, popularly known as Markmuday in collaboration with the Godfather of Sierra Leone Music, “Jimmy B”, Sierra Leone best Afrobeat Artist, Abdul Razak Kanu popularly known Arkman and Trice has on Monday 6th April, 2020 donated food items worth millions of Leones to various vulnerable homes within the Freetown Municipality.

The donation came prior to the three day lockdown declared by the Government of Sierra Leone in order to curtail the spread of the coronavirus in the country.

In his address, the Chief Executive Officer of Slim Nation-Markmuday, stated that indeed the virus is very deadly and it is on record that we have reported Six cases furthering how they must collectively join hands in complementing the efforts of the Government in its strides towards scaling up the fight against the virus maintaining how it is only by doing so that the common enemy could be defeated.

He noted that as a true Philanthropist he decided to join the Godfather of Sierra Leone Music, Jimmy B and others to undertake the distribution of these food items to vulnerable homes, underscoring that it a well-timed gesture especially at this crucial moment as the country declared a three-Day Lockdown nationwide stating how they are doing so with the strong belief that such could be helpful especially at this decisive moment.

He admonished them to adhere to all the precautionary measures that the Government and its partners have put in place also underscoring that it is only when strict adherence is maintained that we could stay safe.

He stated that the gesture is a clear manifestation that he and his colleagues care for their Fans and even non-fans and that they are determined to stand by the side of the people of this country during good and bad times.

Receiving the items, beneficiaries in the various targeted communities expressed gratitude and appreciation to Chief Executive Officer of Slim Nation-Markmuday and others for the gesture which they described as not only important but a timely intervention.

It is on record that the Chief Executive Officer of Slim Nation-Markmuday has been engaged in various charitable activities; recently supported the Government Free Quality Education Initiative by donating learning materials to school going pupils and also has been supporting the First Lady of the Republic of Sierra Leone, Fatima Bio’s ,“Hands off Our Girls Campaign” in the country. 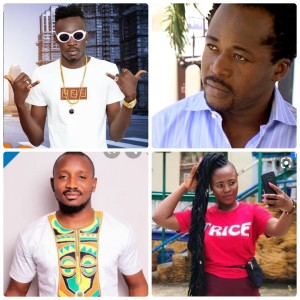