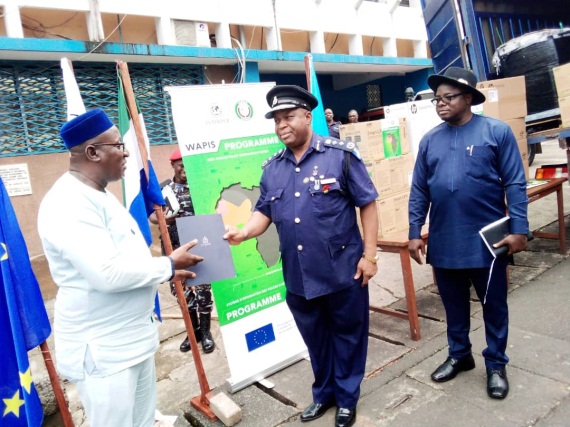 The event which convened on Friday 1st November 2019 at the Police Headquarters in Freetown saw the handing over of quantity of Information Technology Equipment worth over 56,125 Euros equivalent to $ 62,613.89 to the SLP. “This equipment are very timely and necessary in the fight against Transnational Organized Crime such as terrorism, money laundering and other related Cyber offences”, stated Dr. Yansanneh, who is on secondment from the SLP to WAPIS.

He further stated that the equipment will help to strengthen the SLP’s database in terms of data collection, storage and processing, and wholeheartedly expressed thanks and appreciation to the European Union for providing the funds and supporting the project. He also requested for legislation Data Processing.

Hon. Edward Suluku said the government of Sierra Leone will continue to support the WAPIS project and expressed appreciation to the European Union, INTERPOL and WAPIS for the donation. The minister appealed for concerted efforts to eliminate the fear of crime and to neutralize the threat of terrorism in Sierra Leone.

Dr. Richard Moigbeh is the Inspector General Police and was very pleased with the support, coordination and collaboration from the European Union, INTERPOL and WAPIS to the WAPIS Office in Sierra Leone.  On behalf of the SLP Council, the IGP said it was a very unique opportunity to integrate cyber services in the fight against crime at the national, regional and international level. He also thanked the European Union for talking and doing.

The representative of the European Union Madam Jamila indicated that the EU was always ready to support and collaborate with WAPIS and emphasized that there was need for the sustainability of the project.  Other speakers including the Deputy National Security Coordinator and the Director of Crime Services also made meaningful contributions. The ceremony was chaired by the Director of Community Affairs, AIG Kalia Edward Sesay. 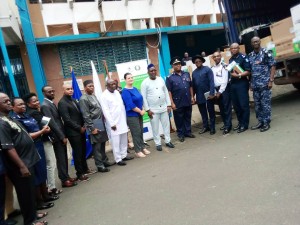