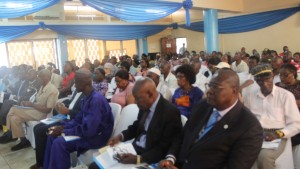 The Rokel Commercial Bank has held its 46th Annual General Meeting (AGM) at the Becceles Davies Hall on Gloucester Street in Freetown. The AGM provided an opportunity for both minority and majority shareholders of the bank to ratify new board members, consider and adopt minutes of the previous AGM and discuss the Audited Financial Statements of the bank for the years 2016 and 2017.
Throughout the deliberations, it was evident that the shareholders who were quite pleased with news that the bank is now profitable were also desirous to eat the fruits of their investments through payment of dividend and bonusses. Therefore, when some assurances of an imminent dividend payment came from no less a person than the Managing Director, Dr Walton Gilpin, nerves were calmed, and the business of the day continued with the adoption of the 2016 and 2107 financial statements. Gilpin also implored the shareholders to be patient and collaborate with bank to ensure more profitability and growth. “We are hungry for profit, we are hungry to start paying dividend…. We want to develop a bank that will go along with innovation, creativity…. we need collaboration to rise up” he averred.
Concerns raised about non-compliance to the Bank of Sierra Leone’s prudential guidelines on single and aggregate obligor lending thresholds were effectively handled by the Managing Director and the KPMG representative who both posited that such a situation no longer obtains and that the auditor’s report which referred to the anomaly would always follow international standards in reporting the financials of their clients. He assured all that the Bank will remain compliant to the country’s banking laws and is on a positive growth trajectory as evidenced by an upward trend in its profit margins in recent times.
Earlier, the Financial Secretary Sahr Jusu who is also a member of the RCBank’s Board reiterated government’s commitment to working with the bank in realizing the aspirations of the shareholders as well as the general public.
Representing the Chairman of the National Commission for Privatisation, Umaru Napoleon Koroma, the Executive Secretary, Mohamed Alie Sesay said proper management structures have been put in place to reposition the bank and make it a forward-looking institution.
Representing the minority shareholders, revered banker and business mogul, Dr Sanpha Koroma commended government over the appointment of Walton Gilpin whom he said has done extremely well to turn around the fortunes of the bank. He said he had held several negotiations with relevant stakeholders that has ensured the inclusion of three representatives into the Bank’s Board.
Rokel Commercial Bank is a state owned bank with 65% shares by the government and 35% shares owned by private citizens.