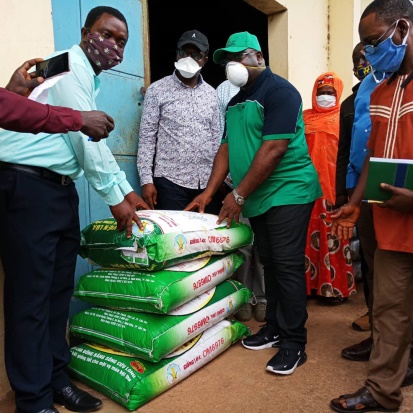 Moses Ceesay, on behalf of the Country Director of the World Food Programme stated in Kambia on the 11th May 2020 that :“The direct health threat of COVID-19, coupled with its widespread indirect socio-economic impacts, are exacerbating already alarmingly high rates of food insecurity in Sierra Leone.”

He made that statement during the handing over ceremony of 900 MT of seed rice to farmer groups by the Smallholder Commercialization and Agribusiness Development Project (SCADeP)   with funding from the World Bank in districts all over the country as part of the Quick Action Economic Response of the Government of Sierra Leone to the impact of COVID19 under the Food Production Pillar.

Referencing the joint January 2020, Ministry of Agriculture and Forestry – WFP Food Security Monitoring System (FSMS) assessment, he said that food insecurity rates in Sierra Leone are 47.7 percent. At the same time the regional food security analysis “Cadre harmonisé” based on this monitoring, stated that 1.3 million people are estimated to suffer from food insecurity under the Phase 3 “Crisis” and the Phase 4 “Emergency” (of which 73,500 people under the phase 4)  between June and August 2020. With data collected in the post-harvest period, when access to and availability of food is at its highest, it is anticipated that food and nutritional insecurity will have further risen as both food stocks are depleted and due to the impact of the COVID-19 outbreak.

Against this backdrop, especially in view of the expected challenges in both international and local food supply chain systems, it is very important to help farmers in Sierra Leone obtain rice seeds that they can plant in time in order to boost their production.

Mr. Ceesay thanked the Ministry of Agriculture and Forestry for its trust in WFP, and he considered it a great honour for WFP to support this important response through its strong logistics capacities.

Chaired by the Kambia District chairperson, in attendance at the ceremony also were the Member of Parliament, SCADeP Representative, chiefdom authorities,staff of MAF and farmer groups.

Speaking on behalf of SCADeP, Mr. Alimamy Kargbo implored farmers to partner with Government to increase rice production not only to reverse the negative effects of the Covid-19 but going forward.

Speaking at the ceremony, the Deputy Minister of Agriculture, Ambassador Abubakarr Karim mentioned that Sierra Leone has all the ecologies for rice production and should have no business in importing rice which costs Government over 200 million dollars every year. He further stated that these improved rice seeds support will help the farmers to avert the effects of the lean season which is normally the hunger period. He thanked WFP for its supply chain support to farmers across the country pointing out that without such the farmers would not have received the rice seeds.

The Minister also mentioned that farmers will be supported with fertilizers and hired tractors to prepare their fields at no cost to the farmers. Representing the farmers, Madam Isata Sesay of the Takelene Women Farmers Association thanked the Minister for such good news, stating “this could not have come at a better time.”

In addition to providing  storage and transportation, support of non-food and medical supplies, WFP is also helping the Government’s COVID-19 response in strengthening the infrastructures such as Treatment facilities and holding centres; providing food support for quarantined people, as well as the most vulnerable people like the homeless and orphans prior to the two lockdowns.

According to Mr. Ceesay, WFP will soon start the treatment feeding for pregnant and lactating mothers and children below 5 who are suffering from moderately acute malnutrition.

“But we also wish to emphasize the importance of timely investment to bolster the early recovery from the COVID’s social economic impacts. This seed distribution is one. We are also ready to resume the school feeding programme as soon as the schools re-open. We are also supporting the inland valley swamps rice production infrastructures as well as the nutrition sensitive agriculture supporting the production of oranges, fresh potatoes and yellow cassavas. One of our focus areas is border areas affected by the restriction of cross border movements like Kambia,” he revealed.