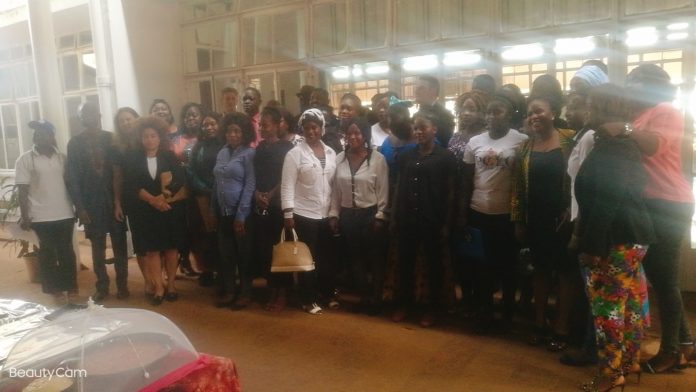 In her statement before the training proper commenced the President of the Women in the Media Sierra Leone (WIMSAL), Femi Jarrett Coker, said it is the very first training they will be conducting in partnership with the British High Commission targeting fifteen female journalists who are very young in the profession with the objective to see how best they can build on their capacities to report on media freedom and gender studies.

She said they distributed application forms all over the country stating that the trainees voluntarily applied. She said as an organization they shortlisted the applicants with set criteria one of which stated that they should be practicing journalists who have practiced for one to five years and should also be journalists attached to media houses.

Femi furthered that they have been changing the narrative stating that there is a massive improvement as compared to the previous ways female practiced journalism for women. She highlighted how journalism was practiced differently as there were no access to social media platforms underscoring how they are lucky for starting practicing with all these facilities and technologies.

She concluded that these facilities will encourage them to endure and concentrate on their field of studies, saying that there are multiples of opportunities for female journalists in particular. The WIMSAL President said as an institution they want them to focus and put more efforts, concentrate during the training. She pointed out that they will provide them with mentors and they will do stories on different areas stating they will provide the story lines to see how best they can support them on a monthly basis.

In her address, the British High Commission Second Secretary on Media Freedom and Human Rights, Katty Hannam said that women empowerment is a very significant priority in the United Kingdom (UK) and for women especially in Sierra Leone and they are working together to enhance media freedom.

She said they are really impressed with the progress so far made within the media landscape but said there is a lot more to do. Katty intimated how such a training is mainly targeting women because women are underrepresented in the media land scape of Sierra Leone. She said they will also give them the opportunities and platform to understand the core issues in journalism and what will be the consequences of practicing wrongly.

She continued by saying that journalism in Sierra Leone has a long way to go especially for female journalists but assured them of continuing to provide them with basic training, equipment, knowledge and skills which journalists should marshal in the field.

Concluding, she said that it is really an exciting day for them to train these unprofessional female journalists as there is the need to do so stating how they will be really happy to see much improvement in terms of doing their work.