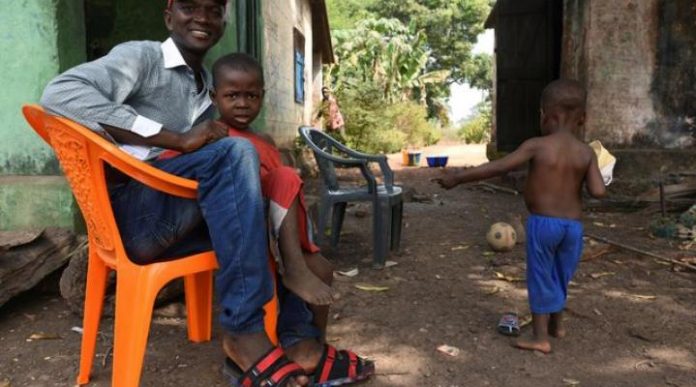 Since Sierra Leone’s largest iron ore mine laid off almost all its workers due to a legal dispute with the Government, the once bustling town of Lunsar has become a shadow of its former self.

In the central market of Lunsar, whose name means “Land of Stones” in the local language, only a few stalls remain open. Taxi drivers and traders say business has ground to a halt. Hundreds, if not thousands, of residents have left altogether.

“I can’t just wait for the mine to restart, because I have five families [to support], my mother and father, brothers, cousins,” said 35-year-old Abdulai Bangura, who like his father had spent much of his adult life working at the Marampa mine.

Since the closure, Bangura has been forced to scrape a living growing corn, cassava, peanuts and potatoes on a plot whose soil shimmers from the abundant iron ore in the ground. In all, 1,700 workers at Marampa were dismissed, nearly 5% of the town’s population and its economic lifeblood.

They are victims of an increasingly acrimonious dispute between President Julius Maada Bio and international iron ore miners that led the Government to revoke their licenses last year, stalling all exports of the mineral which previously generated a quarter of the country’s annual export revenue.

Bio wanted SL Mining, a subsidiary of U.S. commodity trader Gerald Group, to pay higher royalties on its sales of Marampa’s ore. But the tough line has made life difficult for those most dependent on the mines.

Marampa was established in the 1930s and its cycles of boom and bust have shaped Lunsar ever since. The current crisis is among the most serious.

Some residents are on the run from debt collectors they have been unable to repay since the mine closed. Pharmacy owner, Eliza Kanu, is in hiding, wanted by Police for defaulting on a $1,500 loan. Her husband left Lunsar, fleeing his own creditors. “Since the mine closed there are no sales,” Kanu said, sitting on a bench outside a friend’s house. “You can just sit all day without a single customer.”

Until now, Sierra Leone’s Government has ignored international court orders for it to reinstate the license of SL Mining. The company has denied the Government’s accusations it was not paying what it owed. The mines ministry declined to comment.

At the mine, vast un-exportable mounds of ore tower over the conveyor belts and mining machinery, which are thick with dust from lack of use. “There is nothing else in Lunsar to do without the mines,” said SL Mining’s head of community relations and development, Sheik Umar Kamara. “The mine was the source of life.”

Residents are frustrated at what they say is a lack of support from the Government. “Buildings are going to be dilapidated; people are going to move out. So the entire town of Lunsar will become, yet again, another ghost town,” he said.