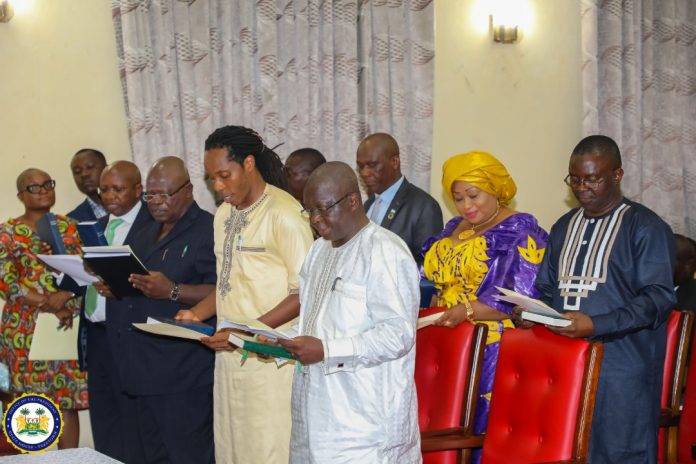 The Parliament of Sierra Leone has on Tuesday 19th November 2019, unanimously approved the Thirteenth Report of its Committee on Appointments and the Public Service, chaired by the acting Leader of Government Business, Hon. Dickson Rogers.

Seconding the motion, Hon. Bashiru Silikie of SLPP cautioned the nominees to work in the best interest of the State and in line with the spirit of the New Direction Manifesto. He also encouraged the nominees to do well in their new appointments for the Government to succeed in addressing some of the challenges relating to the military including improved conditions of service such as health and housing.

In his contribution, Hon. Lahai Marah of APC thanked President Bio for appointing two prominent indigenes of Falaba District, namely Brigadier Rtd. Kellie Conteh and Ms. Manty Tarawalli. He assured the House that the two nominees would deliver on their new appointments. He also called on the nominee for Water Resources to pay keen attention to the provision of safe drinking water which according to him would help the Government to achieve the Free Quality Education amidst good health and safety.

On his part, Hon. Ansumana Bockarie of SLPP informed colleague MPs that 90% of the recent appointments made by President Bio had done well in their respective career paths, adding that he was of the conviction that they would perform as well.

Contributing to the debate, Hon. Abdul Kargbo of APC said that he was meticulous in certifying people, while acknowledging that there were credible people among the nominees. He also decried those who do not wish to see progress and development in the country. “We want people to love the country more than their political parties”, he re-echoed. He heaped praises on some nominees and also drew their attention to address some of the challenges facing the offices relating to their appointments.

Hon Francis Amara Kaisamba of SLPP called on the nominees to work in the interest of the country, while cautioning them not to personalize their offices; stating that the consequences may be counter-productive.

Hon. Daniel Koroma of APC commended the nominees, particularly the Minister of Basic and Senior Secondary Education, Dr. Sengeh for his stance against receiving and accepting gifts; which amounts to corruption.

Hon. Neneh Lebbie of SLPP advised the nominees to do their best by changing the narratives relative to the development of the country.

On his part, the acting Leader of the Opposition, Hon. Hassan Sesay said he was very sensitive about gender and would have liked President Bio to appoint more women; instead of one among the nominees. He also informed the House that it was timely to collaborate and cooperate in Parliament for the development of Sierra Leone. “Let us live for Sierra Leone, the country is bigger than all of us” he stated.

Concluding the debate, the acting Leader of Government Business, Hon. Dickson Rogers took a glance at the galleries and asked the people to stop fighting for politicians, stating that what has been demonstrated in the Well was living testimony of political tolerance in Sierra Leone. He cautioned all and sundry to stop political violence for the development of Sierra Leone.

Reacting to the debate, the Rt. Hon. Speaker of Parliament, Dr. Abass Chernor Bundu informed the appointees that the President has reposed his personal trust and confidence on them and that Parliament has replicated same through their approval. He also cautioned the nominees to open their doors when MPs contact them during the course of executing their oversight duties.

During a subsequent event, on Wednesday 20 November 2019 the newly approved Ministers and Deputy Ministers subscribed to the Oath of Office before His Excellency President Dr Julius Maada Bio in accordance with Section 57 (Act No. 6) of the 1991 Constitution of Sierra Leone at a ceremony held at State House.

Delivering a statement on behalf of the other appointees, the new Minister of Gender and Children’s Affairs, Ms. Manty Beatrice Tarawalli, said that on behalf of herself and her people, she was particularly delighted and honoured “to be appointed as the first female Cabinet Minister from Koinadugu and Falaba districts and also the first from the Kuranko ethnic group”.

“With boundless gratitude for the confidence placed in us by the President and with an unwavering desire to honour that trust, we have humbly accepted our appointments. We are each aware of the scale and gravity of challenges in our institutions but let me assure you, Your Excellency, that with dedication, leadership and our experiences, we will endeavour to find sustainable solutions that will improve on overall performance and achievements. I assure you of excellence, result, loyalty and professionalism,” she said.

In his remarks, President Bio congratulated the public officials and reminded them of the enormity of the task ahead, saying that they had been meticulously chosen to take up the new duties and that he expected them to bring their best to help the development of the country.

“I have the thought that you are fit to hold these positions and I expect nothing less. I even expect more because the task ahead is enormous. I want to assure you of my full support in the discharge of your duties. Congratulations and I wish you all the best,’’ he ended.

During the ceremony, newly appointed Commissioner of the Public Service Commission, Ahmed Abu Kemokai and Commissioners of the Political Parties Registration Commission, PPRC, Alhaji Muctar Babatunde Williams and Christian Sawyer also subscribed to the Oath of Office before President Bio in accordance with Section 151 (8) of the Constitution of Sierra Leone and Section 2(7) of the PPRC Act 2002 respectively.