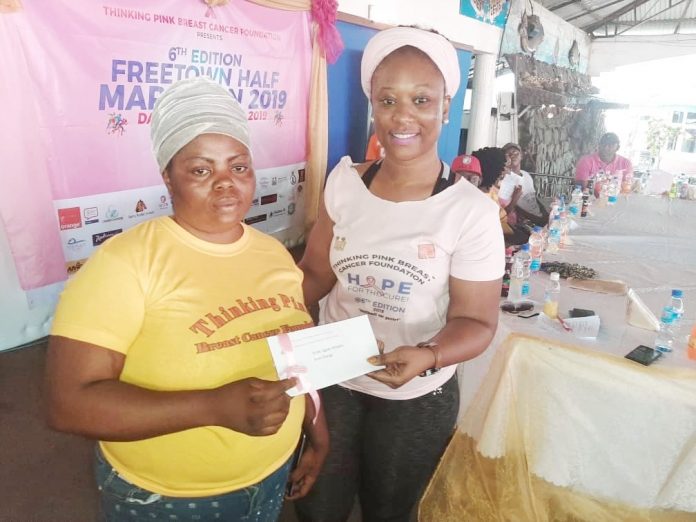 At the just concluded Freetown Marathon for Breast Cancer Awareness week launched by the Thinking Pink Foundation and proudly sponsored by Orange Sierra Leone, women have benefited from the programme.

During the weekend thousands of women joined reputable institutions at Family Kingdom resort in the West of Freetown to support efforts towards raising awareness, treatment and medication for Breast Cancer in the country.

Annie Wonie Katta was one of the beneficiaries who received a package from Orange presented to her by Agnes Williams. Madam Katta said that it’s her hope that one day threats surrounding cancer will be managed and treated.

The need for screening was emphasised and she stressed that early detection for signs and symptoms and treatment are good for women in combating the disease.

The Chief Executive Officer for Thinking Pink Foundation Cremelda Parkinson Pratt welcomed told a crowd of marathoners who made the 21-kilometer Marathon from Haja Fatmata in the East of Freetown to Family Kingdom thanked its partners, sponsors and others that contributed to 6th Edition of the National Freetown Half Marathon a success.

The event held from 1st to 31st October every year raised awareness on breast cancer which, she described as ‘real and a killer disease’. The Marathon is also organized to solicit funds for the treatment of patients.

WHO representative at the Marathon who spoke on Universal Health Coverage, congratulated each and every one that has participated including the sponsors, and noted that he was impressed with the blend of institutions that have gathered at the event, pointing out that this is very significant to making the desired change.

He lauded the efforts of the Ministry of Health,   Government and the people of Sierra Leone for making giant strides in promoting Universal Health Access. Samuel S. Mansaray won this year’s marathon in the male category while Isatu Turay won the female category.

The Thinking Pink Breast Cancer Foundation is engaged in raising nation-wide awareness about the importance of early detection of breast cancer; raise and solicit funds to support financially challenged patients of breast cancer with treatment costs and also advocates at state level for equal access to breast cancer healthcare facility and cost effective medication, amongst others. The theme of the 6th Edition of the Breast Cancer National Awareness Campaign was declared as “Wellbodi nar Gentri”.

The Government of Sierra Leone, INGOs and NGOs were thus called upon by the CEO to join the fight against cancer. It was noted that, during the screening period discoveries are always found to bring alarming figures that increase the rate and this indicates that cancer was on the rise in Sierra Leone.

According to Cremelda Pratt, the rationale of the marathon is not only about winning the race, but raising the awareness. Annie Wonnie Katta said her company’s contributions to the corporate world focuses on improving society especially on health. That is why Orange is committed to provide affordable and reliable telecom services to nation-building.

It would be recalled that Orange has supported Breast Cancer campaign since the days of Airtel, as a result, she said they are still committed to offering the best and affordable telecom services.

Dr Tamba James is a member of the Sierra Leone Medical Association and told the audience that the risk factors of cancer are smoking, sex, body cream etc. He further explained the early signs and symptoms.

The fact people also understood is that cancer is curable just like Malaria, TB, etc, but with early detection.

Aminata Konneh is a nurse working with Thinking Pink Breast Cancer Foundation and added literature to the causes of cancer. She said it causes the cells to divide uncontrollably resulting in tumors, damage to the immune system, and other impairment that can be fatal.

Most of the body’s cells have specific functions and fixed lifespans she told her audience. “While it may sound like a bad thing, cell death is part of a natural and beneficial phenomenon called apoptosis”, she stated.

The occasion was climaxed with the presentation of Awards to winners of the marathon.