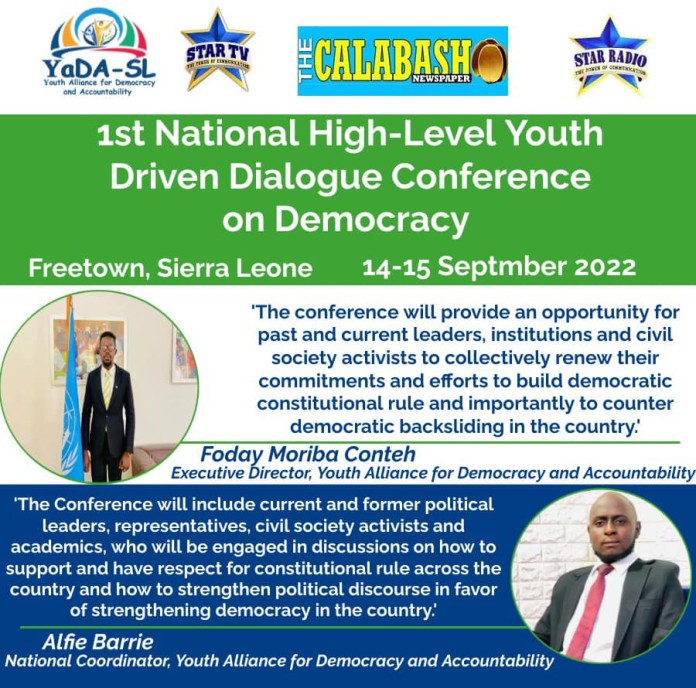 The Youth Alliance for Democracy and Accountability Sierra Leone (YaDA-SL), a registered Non-Governmental youth led Civil Society Organization working towards the promotion of democracy, accountability, human rights, good governance and peace in order to bring long term change and sustainable development in the county is poised to stimulate discussions among current and former political leaders, representatives, civil society activists and academics on the consolidation of democracy  in the country.

It could be recalled that in 2007 the UN General Assembly established the International Day of Democracy (IDD) through a resolution with an objective to encourage Governments to strengthen and consolidate democracy. The day is celebrated on the 15thSeptember every year as an opportunity to review the state of democracy in the world.

In celebrating this year’s International Day of Democracy 2022 in the country, the Youth Alliance for Democracy and Accountability Sierra Leone is poised to host its 1st National High-Level Youth Driven Dialogue Conference on the “Consolidation of Democracy 2022”.

The Two day Conference ,which is scheduled to take place on the 14th & 15th September, 2022, is geared towards supporting the Government of Sierra Leone to strengthen institutions and processes that are more responsive to the needs of ordinary citizens, including the poor, as well as to promote sustainable development.

Commenting on the conference, the National Coordinator of Youth Alliance for Democracy and Accountability, Alfie Barrie pointed out that the conference will serve as an important opportunity for past and current leaders, institutions and civil society activists to collectively renew their commitments and efforts to build democratic constitutional rule and importantly to counter democratic backsliding in the country.

“The upcoming event will include current and former political leaders, representatives, civil society activists and academics, who will be engaged in discussions on how to support and have respect for constitutional rule across the country and how to strengthen political discourse in favor of strengthening democracy in the country,” he underscored.

Alfie Barrie, however, said that the high level dialogue on the consolidation of democracy will stimulate debate on different topics among politicians, diplomats, representatives of civil society organizations and the media especially on how to strengthen democracy in the country.

The National Coordinator added that beneficiaries of the conference will include: Democracy Experts, Politicians and Practitioners, Diplomats, Current and Former Political Leaders, Civil Society Activists, Religious Leaders, Women Leaders, Disabled Groups, the Media, Academics, University Students etc. and they will be drawn from the 16 districts of the country.

He revealed that members of the public who intend to attend the conference should access the delegate’s registration form using the attached link https://docs.google.com/…/1FAIpQLSfvEOPhZe5…/viewform…

“We are looking forward to partner with likeminded organizations in order to make this conference a success, and any organization that wants to partner or sponsor the event should not hesitate to contact us on  +23276482358 or email: youthalliance2022@gmail.com”, he concluded.