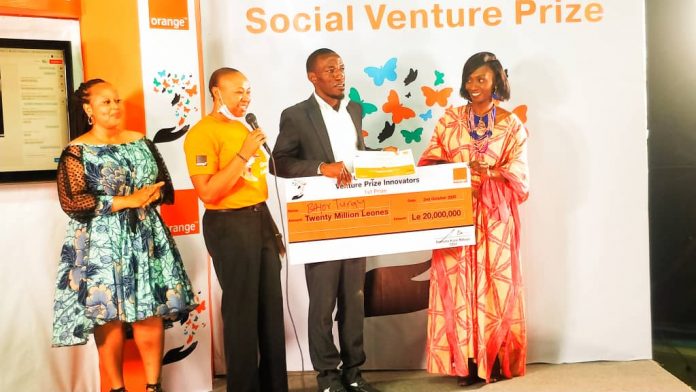 In a bid to provide a platform for young innovators and creative thinkers in the country, one of the leading GSM mobile operators in the country, Orange Sierra Leone, on Friday 2nd October, 2020 awarded Bayor Turay of “Salone Agric Market” winner of this year’s Orange-SL Social Venture Prize Innovators competition at an event held at the Sierra Leone Broadcasting Corporation (SLBC) at New England Ville in Freetown. 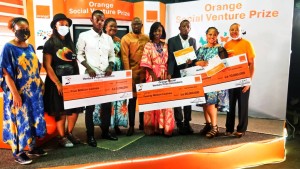 Speaking to this press, Head of Public Relations, Orange-Sierra Leone, Annie Wonnie Katta, said the Orange Social Venture Prize Innovators Competition is geared towards providing a platform for young innovators and creative thinkers in Africa & Middle East, adding that the Orange Social Venture Prize has been in existence for almost 10 years but that this is the second time it is being held in Sierra Leone.

She noted that they had individuals that contested in the preliminary stage of the program and disclosed how Bayoh Turay of “Salone Agric Market, Isata Jalloh of Stem Garage and Mark Fomba of ATM innovation qualified for the final stage. Annie said that the competition aims at rewarding and showcasing the best innovative and socially responsible business projects in Africa and the Middle East in order to support them.

She added that the event was the tenth edition to be hosted in Sierra Leone and that the winner will eventually be participating in the international competition wherein a team of international judges will access and then award the grand prize to the best winners at both the national and international levels.

Three finalists were given the opportunity to do presentations of their projects and subsequently an independent panel of judges was instituted to choose the best young innovator among the three finalists.

After a thorough scrutiny, Bayor Turay the young innovator of the Salone Agric Market emerged as winner, Isata Jalloh of Stem Garage came second and Mark Fomba of ATM innovation came third. She admonished young innovators and the winners to continue to work hard in promoting the innovative and technological aspirations of the country.