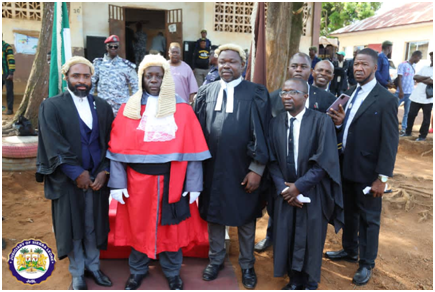 Justice Abdul Sheriff is the current Resident High Court Judge in Port Loko District. During the opening, he assured Kambia stakeholders of speedy conclusion of the 24 cases brought before the Court.

The move is part of the Honourable Chief Justice, His Lordship Justice Desmond Babatunde Edwards’ commitment to make justice expeditious and accessible to all Sierra Leoneans regardless of region, social status or tribe.

In his welcome statement to the delegation, the Paramount Chief of Magbema Chiefdom, who also doubles as the Paramount Chief Member of Parliament, Hon. P.C Bai Farama Tass Bubu Ngbak IV said the people of Kambia District had long looked forward to the day and assured that they will jealously guard it.

“On behalf of my people of Magbema Chiefdom, Kambia District I wish to welcome the Judge, Hon. Justice Abdul Sheriff to Kambia for the opening of the first Criminal Session of the High Court to Kambia District,” adding that “we the people of Kambia District are very happy for this new development and we know the Judiciary’s commitment is unshakeable.”

He said his people have different cases before the Court with no Judge to preside over them. He attributed it to the absence of a Judge and stated that the presence of the Court is timely.

“Our people have a lot of cases before the High Court which are referred to either Makeni or Port Loko Court,” he said, adding that it adds a lot of financial stress for transport fare.

According to him, even the Court Officials found it difficult to serve papers or notices on people because of the difficulty to access those terrains.

He stressed that, “over time we as Paramount Chiefs serving as Custodians of the Land for especially land cases, we see that most of those cases that have been committed to the High Court have accumulated with no prospect to address them immediately.”

This he said is a “grave concern in all our Chiefdoms in Kambia District because we sign legal conveyances for land.”

PC Bai Farama Tass Bubu Ngbak IV went on to note that with the coming of the High Court Judge in the District, it would ameliorate the suffering that his people have faced with especially accessing justice.

While he lauded the developmental strides of the Hon. Chief Justice and the entire administration of the Judiciary, he used the occasion to assure the Judiciary of their fullest support to ensure that justice is served.

“The justice system has improved in Kambia District as well as other places and we’re happy for the present Chief Justice and his progressive strides in the Judiciary for the first time in the history of this Country.”

The Hon. PC Bai Farama Tass Bubu Ngbak IV reiterated that this move will help reduce conflicts which arise from access to justice.”

In his statement, Officer in Charge, Kambia Correctional Centre, Samuel B. Sesay said the regular Court sittings would reduce the constrain and burden to take accused persons outside the District to be tried for various offences.

Officially opening the session, the Resident Minister of the North- West Region who also doubles as the Presidential Spokesperson Dr. Alhaji Alpha Kanu referred to the event as a huge progress for the District which would ensure that justice is dispassionately and expeditiously accessible.

He thanked the Hon. Chief Justice for his unwavering commitment to the mandate of the Judiciary.

The session was officially opened with 24 cases including Conspiracy, Murder, House Breaking an Larceny and Sexual Penetration among others.

In Court, accused Abdulai Kamara pleaded guilty to the charge of Conspiracy and refused the charge of House Breaking and Larceny.

Memunatu Kamara is also before the court, tried by a judge and jury on a one count of murder.

Prosecuting the cases is Lawyer Matthew P.M Lappia while all accused persons are represented by the Legal Aid Board.

The sessions which continue throughout the week in Kambia as well as in other parts of the country, are fully funded by the Judiciary of Sierra Leone courtesy of the Government of Sierra Leone.

They are held in places where there are no sitting Judges.