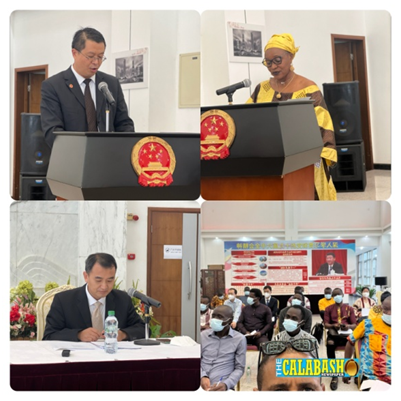 The 4th Information Salon organized by the Chinese Embassy in Sierra Leone, was held on the 12th of August 2022 at the Embassy in Freetown and graced by public and private officials, representatives of various interest groups and members of the Fourth Estate.

The main objective of convening the “Information Salon” was to brief those present about the recent development of the cooperation between China and Sierra Leone and the publication of a White Paper titled, “The Taiwan Question and China’s Reunification in the New Era”.

The Chargé d’affaires of the Chinese Embassy, Li Xiaoyong said he was pleased to see new progress in the China-Sierra Leone cooperation further disclosing that a large number of construction machinery and a modern naval patrol ship have arrived in Freetown.

In addition he said a new batch of Covid-19 vaccines was handed over just 3days ago, that new agricultural equipments, donated by China, have been delivered to the warehouse of the Ministry of Agriculture, that the construction of the Foreign Affairs Academy is nearly completed and 4 mobile clinics buses have departed to provide services in the provinces.

He said that China will continue to uphold the principles of sincerity, real results, amity and good faith and the principle of pursuing the greater good and shared interests in its cooperation with Sierra Leone.

The White Paper, according to him, reiterates the fact that Taiwan is part of China, it demonstrates the resolve of the Communist Party of China (CPC) and the Chinese people and their commitment to national reunification and to emphasize the position and policies of the CPC and the Chinese Government in the new era.

Mr. Li stated that peaceful Cross-Strait reunification is of benefit not only to the Chinese nation, but to all peoples and the international community as a whole.

He pointed out how China and Sierra Leone are time-honored friends maintaining that China highly appreciates the Sierra Leonean Government’s long-time support for the one-China principle furthering that the Embassy is thanking all sectors of the Sierra Leonean society for their understanding of China’s position.

The Director General of Sierra Leone’s Ministry of Foreign Affairs and International Cooperation, Madam Victoria Sulimani, on behalf of the Government expressed firmed commitment towards the One-China Principle as enshrined by the UN Resolution 2758. She emphasized that Sierra Leone has a strong and long standing relationship with the People’s Republic of China dating beyond the 1970s.

She revealed that recently the Foreign Ministers of both countries expressed satisfaction on the relationship between China and Sierra Leone noting that the Government of Sierra Leone appreciated the support of China on the construction of the Foreign Service Academy, the renovation of the National Stadium and other projects that have been funded by the Chinese Government.