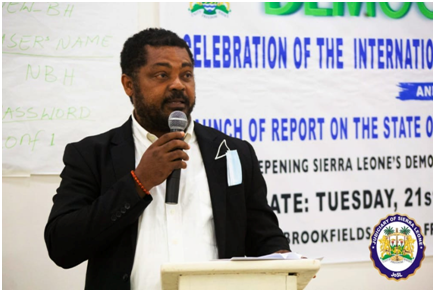 In a Press Release dated 13th August, 2022 the Sierra Leone Association of Journalists (SLAJ) stated that it is deeply perplexed by the recent violent protests in the country that claimed the lives of innocent civilians and security service personnel, and the destruction of public property reminiscent of the country’s 11 years of civil war (1991-2002) further conveying it sincere condolences to the bereaved families also praying for their souls to rest in peace.

SLAJ also underscored that it is further concerned about the trend of happenings in the country showing deep hate and division along tribe, region, and politics, leaving little or no room for healthy dialogue, and well-meaning engagement and consultation on national issues.

It continued how the debates and interactions on the newfound social media space are full of those divisions which, it says, are permeating our homes, communities, places of worship, educational institutions, public and private offices, the media, civil society organizations, the security forces, professional associations, unions, social and cultural groupings, among young people, adults, the aged, etc.

SLAJ maintains that it is deeply worried that if we continue on that path there is every possibility that our dark history will revisit us and when that happens, all, including our children and future generations, will lose.

The President of SLAJ, Ahmed Sahid Nasralla, said: “We are a nation apparently on the brink, and we must work together to return to the center. We need to de-escalate the rhetoric, hypocrisy, hate, and politics so that we can dialogue in a respectful and patriotic manner on national issues in the interest of the public good cautioning that it should never be an issue of THEM vs US or vice versa.”

SLAJ said to address impunity for heinous crimes against innocent civilians and security personnel; it is calling for justice and accountability in a fair, transparent, and impartial manner, with respect for fundamental rights and freedoms.

The Association concluded that meanwhile, SLAJ is reminding journalists about their responsibility to promote peace, stability, and national cohesion and to inform the public accurately on issues.