The Vice President of  the Republic of Sierra Leone, Dr. Juldeh Jalloh and delegation, on Wednesday 20th November 2019 met with six  congressional members to  discuss  progress on Sierra Leone’s Millennium Challenge Corporation (MCC) partnership within the context of the New Direction’s Human Capital Development focus. The meetings were also an opportunity to identify areas to enhance and deepen the much cherished US-Sierra Leone bilateral relationship.

While speaking to Republican Congressman Member, Michael McCaul, the VP stressed Sierra Leone’s keen interest to improve trade with the United States. He also talked about the Government’s commitment to fighting Trafficking in Persons and sought the support of the Congressman on this issue as a member of the Foreign Affairs Committee.

In another meeting with Congress Members Karen Bass, Susan Jackson Lee and three other members of the Congressional Black Caucus; the delegation showcased the progress that has been made in implementing the $44.4 million MCC Threshold program. The Congress Members were interested in exploring how a Compact could address the challenges in the water and electricity sectors to build on the gains of the Threshold Program. Congress Member Bass conveyed her support of Sierra Leone and His Excellency the President’s drive to promote Human Capital Development. She noted that Sierra Leone can count on her support in its bid for a MCC Compact.

Prior to this meeting, the Vice President and delegation have had successful engagements with key US stakeholders including the Deputy US Trade Representative, USAID Administrator, Ambassador Mark Green and  the MCC CEO. 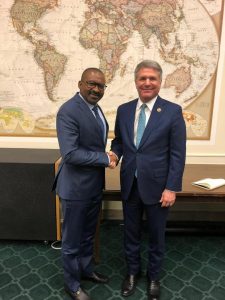