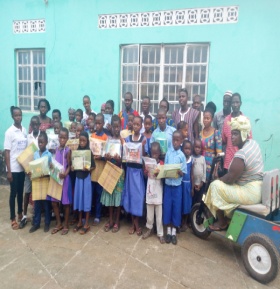 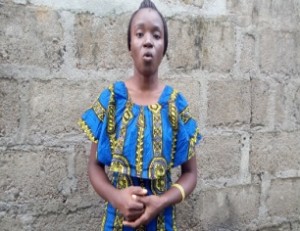 The donation ceremony which took place on Friday, September 20, 2019 at A2HF-SL’s head office on 21 Conteh Street in Makeni was chaired by Miata Saffa Jalloh, the organization’s Secretary. She disclosed that the day’s event is in fulfilment of A2HF-SL’s “Back to School Donation” for the 2019/2020 academic year.

Yusuf Sow, the CEO II of A2HF-SL, a non-governmental organization, welcomed all to the event and admonished them that the “Back to School Donation” is solely sponsored by members of the organization and that among the many children in the district, A2HF-SL thought it wise to rationally select the most vulnerable school going pupils to benefit from this project.

Madam Mariatu Sesay, a single parent, who also doubles as the Chairlady for Bombali District Disable Association expressed thanks and appreciation to Action to Heal Foundation Sierra Leone for providing their children with the various school materials.

She assured the donors on behalf of other beneficiary parents of robust parenting and monitoring of their children’s schooling to ensure that they become leaders when they shall have completed schooling in the near future.

“Among the 28 beneficiaries, we also donated some cash amount of Le 150,000 each to two of the beneficiaries, Mustapha I. Jalloh and Hawa Kamara all in JSS I, since their parents are blind baggers’ the amount was given to them to cover their school colours cost, an amount they can use cover their school expenses for the whole 2019/2020 academic year”, said Madam Zainab Mummy Tholley, the founder and CEO I of the organization.

She added that ‘at A2HF-SL, we believe in wiping tears from the eyes of physically challenged children and vulnerable persons, which is why we have  donated to 28 vulnerable children in Bombali District school items such as books, pens, raffia bags, mathematical sets, eraser, sharpeners and some cash to the most vulnerable children, out of the 50 physically children the organization have selected to responsible for, as parts of our timely step to support the Free Quality Education in the country.’

“The doors of our office are always widely open for partnership with INGOs and more and I am therefore, calling on other well-wishers, philanthropists and all to donate through the organization’s Rokel Commercial Bank Account: Name & Number: Action To Heal Foundation Sierra Leone – 125502866 to help complement our efforts in providing for and fighting against vulnerable and physically children dropping out of school due to last of support Madam Zainab Mummy Tholley concludes in an interview with this medium after the donation.